Social interactions not rewarding for children with autism 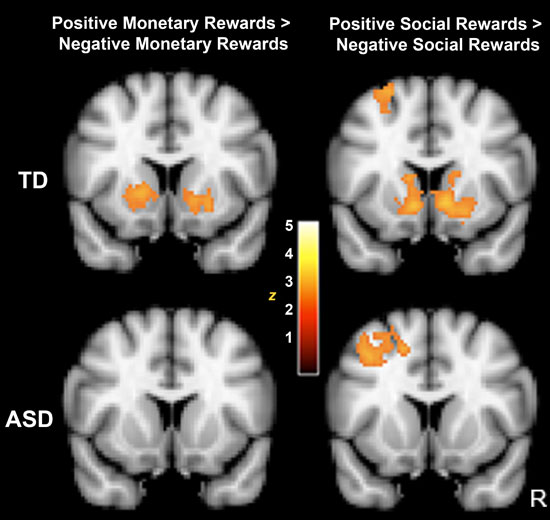 Unrewarding interactions: Children with autism show lower brain activity in the ventral striatum as they participate in learning activities that offer social rewards.

Children with autism have abnormally low brain activity in the ventral striatum, the ‘reward center’ of the brain, when given money or shown a happy face, according to a study in Autism Research1.

What’s more, activity in the region is lower in response to faces than to money.

“Not only did there seem to be an overall dampening of the reward response, but it was very specifically the social rewards that were particularly affected,” says lead investigator Susan Bookheimer, professor of cognitive neurosciences at the University of California, Los Angeles.

Typically developing infants prefer to look at faces and voices over toys and other physical objects. In contrast, babies with autism are drawn to objects and show less interest in caregivers2.

The new study, published in April, provides the first imaging data to support the ‘social motivation’ hypothesis — the notion that children with autism don’t interact socially because they derive less pleasure from social interactions than do healthy children3. Previous studies had relied on differences in behaviors such as attention and eye gaze.

“This gives a window into the brain by saying that there’s actually something neurobiological supporting this social motivation hypothesis,” says co-investigator Ashley Scott-Van Zeeland, a postdoctoral fellow in Bookheimer’s lab.

The study also found that, compared with controls, children with autism show lower brain activity as they participate in learning activities — such as classifying geometric designs into groups — that offer social rewards.

This dampened brain activity occurs in regions that control ‘implicit,’ or unconscious, learning — for instance, knowing how close to stand to strangers at a cocktail party. Children with autism often struggle with learning these socially important cues, but excel at tasks of explicit learning, such as memorizing lists of words.

Identifying these patterns may begin to explain the wide range of behavioral differences in individuals with autism, says Nancy Minshew, professor of psychiatry and neurology at the University of Pittsburgh, who was not involved with the study.

For example, some children with autism fixate on certain objects, such as bugs or stamp collections, and have little interest in playing with other children. Others may be indifferent to either social interactions or physical objects and, in some extreme cases, may not even want to leave their homes. “We need to understand all of that variability,” Minshew says.

The new study used functional magnetic resonance imaging (fMRI) to compare brain activity in 16 boys with autism spectrum disorders and 16 healthy controls as they performed learning tests for which they would receive either social (pictures of faces) or non-social (monetary) rewards.

The test measured implicit learning: The researchers showed children cards with eye-catching fractal designs and asked them to press a button classifying the image as belonging to group ‘1’ or to group ‘2.’ Over time, healthy controls learned — unconsciously — the relationship between the images and numbers and were rewarded with either smiling faces or gold coins when they chose the correct number. Children with autism, in contrast, did not learn the associations.

The only other imaging study of this kind focused on non-social rewards. In 2008, Declan Murphy and colleagues at Kings College in London used fMRI to observe brain activity while adults with autism played a computer game4. After winning money, those with autism show higher brain activity in the left anterior cingulate, a brain region responsible for reward anticipation, the study found. The researchers suggest that higher activity in this region might be the result of the participants’ focus on performance and rewards.

Although the new work found lower activity in the same region, the data from the two studies are consistent, Murphy says. “The most important thing is that both studies find the same region to be abnormal in function,” he says.

It is too early to say whether children with autism have a fundamental breakdown in the rewards system or whether the deficit is specific to social rewards, the researchers say.

An alternative possibility is that children with autism are attuned to other kinds of rewards. For instance, they may take great pleasure in following rules or in doing activities in a certain sequence, which can lead to a more intense interest in those experiences, Minshew says.

Bookheimer and her colleagues are testing a variety of rewards — such as a picture of the mother or a favorite toy of the child with autism — to see whether they can provoke a reward response in the brain.

Regardless of what naturally motivates children with autism, they can be taught to value social rewards through clever behavioral interventions, says Geraldine Dawson, chief science officer of Autism Speaks, who was not involved with the study.

For instance, children drawn to toys or physical objects can be given a mechanical object that requires a person to activate it. “[That strategy is] a way of teaching the child how to enjoy an activity with another person,” she says. “Once they learn that, then a whole new world is open to them.”