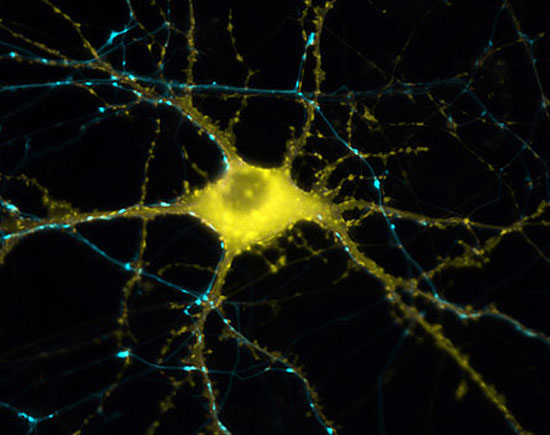 Standing strong: When there is a decrease in the number of synapses, the ones that remain normally scale up their activity.

Blocking the expression of the MeCP2 gene decreases the number of synapses, the junctions between neurons. It also prevents synapses from scaling up their activity to make up for the loss, according to unpublished data shown yesterday at the Society for Neuroscience annual meeting in San Diego.

A mutant form of MeCP2 causes Rett syndrome, an autism-like condition that is characterized by repetitive behavior and language delay. Modifications in the strength of synapses are thought to underlie memory and learning, and this synaptic plasticity — variability in the strength of the signal between neurons — is greatly impaired in people with the syndrome.

“Normally when there is reduction in excitatory conductivity, there is a scaling up of synaptic strength,” says Sacha Nelson, professor of biology at Brandeis University.

Previous work from the Nelson-Turrigiano laboratory at Brandeis has shown that this homeostatic activity is disrupted in MeCP2 mutant mice. But it was not clear whether MeCP2 alone regulates synaptic scaling.

To answer that question, the researchers used short hairpins — pieces of RNA that match a sequence in MeCP2 — to reduce the protein’s expression in neurons cultured from the visual cortex.

The hairpins lowered MeCP2 protein levels by about 65 percent in individual neurons. The researchers found that MeCP2 loss both decreases the number of synapses and blocks the accumulation of GluR1 — the receptor for an excitatory neurotransmitter needed to convert chemical signals into electrical impulses.

Though leery of making broad statements about the implications of the work, Nelson notes that disruptions in synaptic homeostasis caused by MeCP2 loss could be one factor contributing to the impaired synaptic plasticity seen in girls with Rett syndrome.

“We don’t know how much of that is from the effect on the number of synapses and how much is due to this apparent inability of synapses to scale up their strength,” he says. “But perhaps by studying more of the mechanisms involved we can learn to selectively interfere with one or the other.”