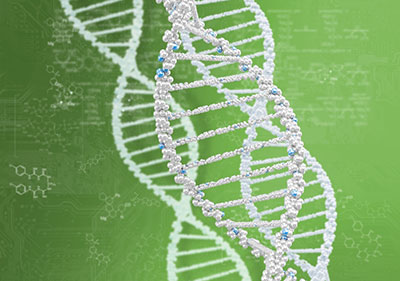 Recurrent risk:  Spontaneous mutations that crop up repeatedly across disorders suggest that there is no such thing as just an autism risk factor.

Autism, epilepsy and intellectual disability share certain risk genes, and mutations in these genes recur in multiple individuals with one of the disorders. The preliminary results were presented Friday at the American Society of Human Genetics Meeting in Boston, Massachusetts.

Brian O’Roak and his colleagues combined two methods to ferret out recurrences of spontaneous mutations, finding several novel autism risk genes. Many of these genes have known connections to epilepsy and intellectual disability.

“The most interesting thing we can say definitively is that there is significant overlap between the most mutated genes across syndromic epilepsies, intellectual disability and autism,” says O’Roak, assistant professor of genetics at Oregon Health & Science University in Portland.

Up to half of people with autism have epilepsy and just as many can have intellectual disability. Although some genetic links among the three disorders have been uncovered, questions remain about whether identified risk genes are specific to a disorder or play a generalized role in cognition.

De novo, or spontaneously occurring, mutations are typically red flags for autism risk in people who have no family history of the disorder. But the chance of one of these mutations cropping up in more than one person is rare — on the order of 1 in 1,000.

O’Roak and his colleagues used a two-tiered approach to search for recurrences: fully sequencing the exomes, or protein-coding regions of the genome, of trios of parents and children, and targeted sequencing of candidate genes.

They looked at 64 candidate genes identified in six previous studies, screening more than 6,000 people. They sequenced the genes in depth and reanalyzed them.

Of the harmful mutations they found, half — about 30 so far — are de novo and half inherited. This is different than results from previous studies, in which only 30 percent of the mutations could be identified as de novo. The higher number strengthens the case for those 30 mutations pointing to bona fide autism genes, O’Roak says.

The list of candidates includes CACNA1D, SETDB2 and NCKAP1, each of which seems to be disrupted in multiple people with autism. CACNA1D has links to epilepsy and SETDB2 to both epilepsy and intellectual disability.