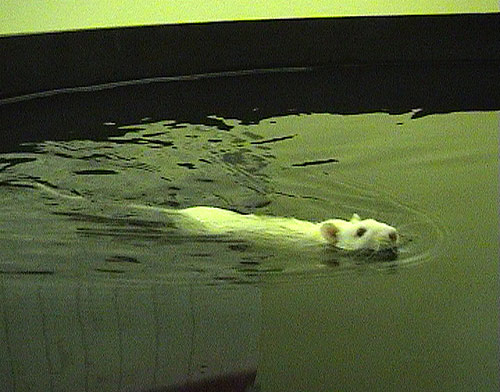 Mother maze: Rats born to mothers injected with a bacterial toxin when pregnant have difficulties as adolescents with a common test of learning and memory.

Mother maze: Rats born to mothers injected with a bacterial toxin when pregnant have difficulties as adolescents with a common test of learning and memory.

Altered function of a brain receptor may help explain why maternal infection during pregnancy raises the risk for schizophrenia in the offspring, according to an unpublished rat study presented at the 2011 Society for Neuroscience annual meeting in Washington, D.C.

Studies have suggested that people with schizophrenia have less signaling than normal through their NMDA receptors, and this deficiency may cause some of the disorder’s symptoms, including cognitive deficits1. The NMDA receptor, a complex of proteins at the junction between neurons that signal with the chemical messenger glutamate, has also been implicated in autism.

Large epidemiological studies have shown that women who are exposed to infections when pregnant, particularly during the first and second trimesters,increase their risk of having a child with schizophrenia. In recent years, researchers have also begun to probe potential links between maternal infection and autism, although this relationship is not as well established.

Much of the work implicating maternal infection in autism focuses on viruses such as influenza. In the new study, researchers mimicked infection by injecting pregnant rats with lipopolysaccharide (LPS), a toxin produced by infectious bacteria, at day 15 or 16 of gestation — roughly analogous to the second trimester of a human pregnancy.

They focused on this area of the brain because its structure and function are altered in many people with schizophrenia. “The hippocampus is also fundamental to learning and memory,” says Melissa Burt, a graduate student in the laboratory of Tak Pan Wong at McGill University in Montreal, Canada, who presented the work.

The NMDA receptor’s role in long-term depression, or LTD, a cellular process that is involved in laying down new memories, “was completely extinguished in the hippocampus,” Burt adds.

The researchers also tested the rats’ behavior using a Morris water maze test, in which rats are placed in a tank of water and have to find a platform that they can stand on and rest. “Rats are very good swimmers, but they really don’t like the water,” says Burt. So they work hard to find the platform.

The researchers found that rats born to mothers injected with LPS are just as good at controls at learning where the platform is. But only one day later, the LPS offspring, unlike the controls, can’t remember its location.

However, an injection of LPS may not mimic all the effects of an actual infection during pregnancy, notes Paul Patterson, professor of biology at the California Institute of Technology, who was not involved in the work.