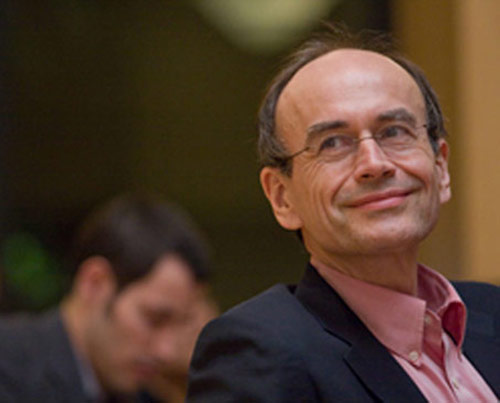 BayAreaEventPhotography.com Generous mentor: Thomas Südhof’s postdoctoral fellows say he urged them to keep working on projects they began in his lab, even if it made them his competitors.

Arriving in Dallas to do a postdoctoral fellowship in 1983, Thomas Südhof was struck by the fact that it was difficult to find a place to walk. “There were no parks. There were no people on the streets,” he says. “Everybody was driving.”

Despite the culture shock, Südhof liked Texas well enough that he later turned down an opportunity to return to Germany as director of the Max Planck Institute for Experimental Medicine. Instead, he set up his own lab at the University of Texas Southwestern Medical Center, where he built a stellar scientific reputation for his groundbreaking work on proteins that gather at the synapse, the junction between neurons.

Among these, he identified and characterized neurexins and neuroligins, proteins that together ensure that information is transmitted properly between neurons. Mutations in the genes regulating these proteins are associated with autism.

“Neurexins and neuroligins play a key role and their dysfunction can cause autism,” Südhof says. “That is my central thesis.”

In 2008, Südhof moved to Stanford University, where he is professor of molecular and cellular physiology. Last year, he won a Kavli prize, a $1 million award from the Norwegian Academy of Science and Letters and the Kavli Foundation, for his work on synaptic signaling.

Although he has lived and worked in the U.S. for nearly 30 years, the people who know him best say that Südhof remains in some ways quintessentially German.

“He’s frank. In our country that is regarded as a positive trait so long as you are fair, and he is fair,” says Nils Brose, who was a postdoctoral fellow in Südhof’s lab. Brose returned to Germany in 1995, and later assumed the Max Planck directorship that Südhof had rejected.

Südhof is not overly friendly with people he doesn’t know well, which can be misinterpreted as rudeness, Brose says, as can his tendency not to withhold his opinions. “He’s a very sober man,” Brose says, “but also a very reliable, straightforward and honest person.”

Born in Germany in 1955, Südhof came to the U.S. to work on molecular genetics in the laboratory of Michael S. Brown and Joseph L. Goldstein at the University of Texas Health Science Center, the famous duo who won the Nobel Prize in 1985 for their work on cholesterol metabolism.

Soon after he arrived at their lab, Südhof cloned the gene for the low-density lipoprotein receptor, which fed into a larger study of receptor-mediated endocytosis — a process by which cells internalize molecules.

When Südhof launched his own lab in 1986, he began exploring how synapses form and develop a specific identity based upon their location in the brain.

One of his first major discoveries was purifying and cloning a toxin produced by the black widow spider, and then its protein receptor, neurexin. “It took a long time for people to think that work was important,” he says.

Südhof’s work on synaptic proteins over the next 20 years almost singlehandedly revolutionized the field, says his frequent collaborator, Rob Malenka, professor of psychiatry at Stanford.

“Not only did [Südhof] isolate and start cloning them, he figured out their biochemical properties and binding partners, and then using mouse genetics started knocking them out one, two and three at a time,” Malenka says. Südhof followed up that work by making mutations in the genes, reinserting them in mice and studying their function.

Working with such a productive mentor propelled Südhof’s postdoctoral fellows into a higher orbit, says Markus Missler, professor of anatomy and molecular neurobiology at the University of Münster in Germany, and a postdoc in Südhof’s lab from 1994 to 1999.

“Due to the many different synaptic molecules his lab discovered or cloned,” Missler recalls, “every postdoc had not just a couple of projects to work on, but usually a complete protein family to explore.”

Südhof also provided a model of absolute dedication to science. “Coming back from a conference, more often than not he would come to the lab straight from the airport before driving home, even if it was 9 p.m. on a Saturday night,” says Missler. “If he did not make it back in time, you could bet that he called from some airport somewhere in the world to discuss data.”

Missler says Südhof’s phenomenal memory is a key factor in his success. “For the years I worked with him he was able to recall almost every single blot that was run by the lab and only briefly shown to him walking down the hallway,” Missler says.

Malenka began collaborating with Südhof in 1993, when he was already quite famous for his work with presynaptic proteins. Despite his stature, Malenka found Südhof very approachable and eager to collaborate.

“He’s a very smart fellow and he quickly realized that he needed people like me to study the functional consequences of those mutations,” Malenka says.

The two worked together at a distance for 15 years until Malenka saw the opportunity for a closer collaboration. “I was heading up a search committee, and on a lark I said, ‘Would you ever consider moving to Stanford?’ I knew he was very happy at Texas, but to my surprise he said, ‘Yes.'”

After Südhof moved to Stanford in 2008, the two grew closer, sharing a dozen postdocs, lab equipment and administrators in side-by-side offices and labs. “What makes our collaboration work is mutual respect and 100 percent trust,” Malenka says.

People view their partnership as a bit of an odd-couple arrangement, given the wide differences in their personalities.

“I’m viewed as the more gregarious, outgoing one, but I’m actually less interactive scientifically than Tom,” Malenka says. “He’s viewed as very German and kind of restricted and constrained, but when it comes to science, he is much more willing to collaborate.”

Malenka says he particularly admires Südhof’s willingness to reverse course when the data points in a new direction. “He is very opinionated, but what I like about him is that he will admit when he is wrong.”

Despite Südhof’s reputation for combativeness, Malenka says, “For Tom, it’s all about the science. There’s a seriousness to the way he approaches science and, in his own way, a passion.”