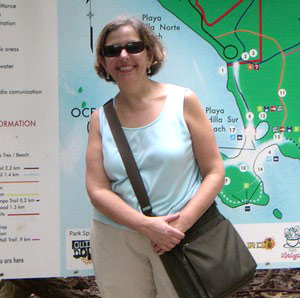 Out for adventure: Language guru Helen Tager-Flusberg, shown here on a recent trip to Costa Rica, loves to travel around the world.

Of the thousand or so individuals with autism Helen Tager-Flusberg has studied since the 1970s, one sharply stands out in her memory: a 13-year-old boy whose special education teachers had been helping him recognize different emotions.

When the boy walked into Tager-Flusberg’s small research room, she asked him, “How are you doing today?”

He looked her straight in the eye, and with a poker face said, “I’m happy, mad, glad and sad!”

Tager-Flusberg still remembers how much his response startled her.

“I couldn’t decide — did he understand these words? Did he actually experience all of this? Was it that he had just learned these words? Did he pick these words because of their rhyming? Was there, in fact, a little bit of irony in all of this?” Tager-Flusberg recalls. “I was clueless. But it opened my eyes that perhaps there’s a lot more to some people, that you can’t take them at face value.”

The language deficit in autism is complex and diverse: Many children have language delay, some speak in a monotone or repeat others’ words, and some don’t speak at all. Tager-Flusberg, professor of psychology at Boston University and president of the International Society for Autism Research, has devoted her career to sorting it all out.

“If you asked somebody, ‘Who are the famous people studying language in autism?’ she’s the first name to come to mind,” says Ken Wexler, professor of brain and cognitive science at the Massachusetts Institute of Technology (MIT).

Since moving from London to Boston nearly 40 years ago, Tager-Flusberg has investigated the linguistic abilities of people with autism using a wide variety of approaches: psychological tests, eye tracking, brain imaging and, most recently, by studying younger siblings of children with the disorder. She now proposes that most language-related deficits in verbal children with autism are no different from those seen in other language disorders — with one exception.

“Where you see the difference in autism is in those aspects of language that really entail a theory of mind,” she says, referring to the ability to understand other people’s beliefs and intentions. “Their ability to use language effectively and appropriately in a social context is what’s significantly impaired.”

Tager-Flusberg was born in England, but did her graduate work in the infamously serious and almost entirely male experimental psychology department at Harvard University. This was in the 1970s, and she shared the hallways with the likes of B.F. Skinner, perhaps most famous for devising a box that delivered electrical shocks to rats.

“It was very serious psychologists who mostly did not deal with live human beings. They were famous for being extremely rigorous and not pleasant,” says Cathy Lord, who overlapped with Tager-Flusberg at Harvard, and is now director of the Institute for Brain Development at New York-Presbyterian Hospital.

Still, Tager-Flusberg, who is known for her no-nonsense British sensibility, had no trouble holding her own. “She toughed it out,” Lord says.

Lord and Tager-Flusberg both did their graduate work with the late Roger Brown, who stood apart from his colleagues for his long-term observations of children during language development. Tager-Flusberg applied the same approach to children with autism, a disorder that had received little attention at the time.

For her dissertation, for example, she investigated whether children with autism understand syntax, or the grammatical rules of language, by giving them sentences — such as ‘The boy pushes the girl’ and ‘The girl was pushed by the boy’ — and asking them to act out each sentence using toys.

Healthy children and those with autism both use a simple word-order strategy, which assumes that the subject precedes the object, she found. In other words, children with autism seem approach language much the same way healthy children do.

This was a surprise, especially because linguists at that time were deeply focused on the importance of syntax. Tager-Flusberg spent the following two decades using psychology to delve deeper into the language deficit in autism.

In a 1992 study, for example, she analyzed recordings of children having conversations with their mothers in their homes over two years. She found that children with autism make fewer references to psychological states, as measured by their infrequent use of verbs such as believe, figure, forget and trick, compared with either typical controls or those who have Down syndrome1.

These days, her team at Boston University is using a similar study design to explore how children with autism use pronouns. So far, their data suggest that children with the disorder often use pronouns without the right context. For instance, if there were three women in a story, they might refer to each of them as ‘she.’

Both these studies suggest that children with autism speak without taking their audience into account, Tager-Flusberg says.

“When you tell a story, it’s not about you telling a story, it’s about your listener hearing it,” she says. “To have theory of mind, you’ve got to appreciate that that’s what you’re doing.”

Not everyone agrees that the language deficit in people with autism stems only from social cognition, however. Wexler, for instance, has unpublished results showing that children with autism struggle with certain grammatical rules. “I think it’s going to turn out that the linguistic deficit in autism is much worse” than previously assumed, he says.

To resolve some of these discrepancies, Wexler and Tager-Flusberg, along with MIT’s John Gabrieli, plan to scan the brains of children with autism or other language disorders while they make grammatical judgments or repeat strings of made-up words.

This willingness to use a wide range of technologies distinguishes Tager-Flusberg from most experimental psychologists.

“She’s always interested in using something new,” says her collaborator Susan Folstein, professor of psychiatry at the University of Miami. “[Tager-Flusberg] has brought together all kinds of collaborations, and put together people with unusual skills — often unrelated to her own.”

For example, Tager-Flusberg began working with Charles Nelson, research director at Children’s Hospital Boston, after a chance meeting on the elbow of Cape Cod in the summer of 2004. The two launched a project on the so-called ‘baby sibs’ of children with autism, who have a higher-than-normal risk of developing the disorder.

In March, they reported that electroencephalography can distinguish 9-month-old baby sibs from typical controls with 80 percent accuracy2.

Tager-Flusberg is able to juggle so many projects at once is because she is so “organized and compulsive,” says Nelson. “She can be very British sometimes. I have to needle her to lighten up.”

Tager-Flusberg says she considers herself lucky to have access to this wide variety of technologies — tools that weren’t available years ago, when she was puzzling through that 13-year-old boy’s poker face.

“I could never have imagined where we would be, what kind of research we would be doing today, when I first started out,” she says. “That would have been a dream. So that’s been the most rewarding aspect of a career in science.”