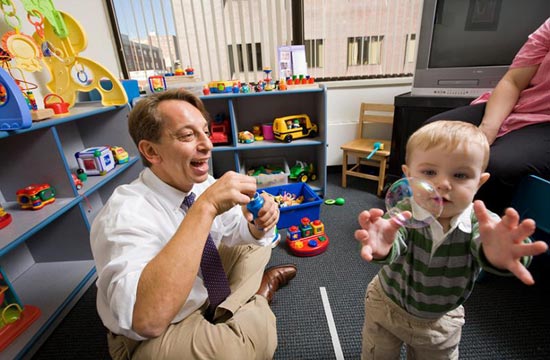 R. Lisak Look in my eyes: With his protégé Warren Jones, Ami Klin has built tools to track eye movements in children with autism.

Sitting on a sofa in his office at the Yale Child Study Center, Ami Klin plays a movie clip on a tiny laptop.

The clip stars a younger Klin, with larger glasses but the same easy smile, vying for the attention of a young girl with autism. His face inches from hers, he speaks in a warm, animated voice. But the girl never looks from the toy blocks in her hands. Suddenly, she spots an orange M&M in the far corner of the room and scoots after it.

These interactions, though frequent, always affect the extroverted psychologist. “When you walk into a room with a young child and you feel that sense of absence ― that you are not being processed, that you are not having any impact ― it’s quite striking,” he says.

Klin came to Yale in 1989 to study autism. A decade ago, he recruited Warren Jones, then a soft-spoken 22-year-old sculptor and mechanical engineer who had taught art to children with autism.

Together, Klin and his protégé have developed a series of revolutionary eye-tracking experiments1 to directly measure these visual perceptions, beginning in infancy. “If we truly want to understand what’s going on in their minds, we need to truly visualize the world through their eyes,” Klin says. “And that’s a bit of a work of art.”

In the early 1980s, Klin was a politically active college student at the Hebrew University of Jerusalem. Born in Brazil to Holocaust survivors, he was fascinated by the concept of political alienation, particularly how cultural values create a sense of self. As part of a scholarship agreement, he spent weekends working with handicapped children, many of whom had autism.

“This was a ripe marriage,” he recalls, because these children didn’t have a normal sense of self. “They were like a natural experiment of the very concepts that I was interested in academically.”

When Klin began a doctorate program in psychology at the London School of Economics, he lived in an apartment complex for people with mental disabilities in one of London’s poorest neighborhoods. “I went to a school that was, as the Brits would say, “very posh.’ Then I’d go home and there would be people naked and having seizures,” he recalls.

His 1988 thesis ― which won a university prize for outstanding scholarship ― was based on experiments on both autistic and normal toddlers and those with autism, using a two-button toy that Klin had built himself. When one button was pressed, sounds of the child’s mother’s voice emitted from the toy. When the other button was pressed, the child instead heard non-intelligible speech sounds.

Testing children in their own homes, Klin found that normal toddlers overwhelmingly prefer to hear their mother’s voice, whereas toddlers with autism had no such preference2.

“It was a real landmark study, and showed him to be an imaginative, pioneering researcher,” says cognitive neuroscientist Uta Frith, who worked with Klin at the UK’s Medical Research Council.

Unbeknownst to Klin, rumors of his work trickled over to Donald Cohen, then director of the prestigious Yale Child Study Center who died in 2001. One evening in 1988, unannounced, Cohen called Klin at home and asked if they could meet in London.

“I was giddy,” Klin recalls. “I idolized him as a leader in the field, and here he was interested in the conceptual stuff that I was writing about.”

Klin met Cohen in a London hotel, feeling underdressed in dirty clothes from his side job as a motorcycle dispatch rider. “But luckily he looked past that,” Klin says, joking.

Cohen soon recruited Klin to New Haven, where Klin began formal training in clinical psychology. He also collaborated with the center’s other researchers on autism diagnosis and classification. It wasn’t until five months later that he learned his title: post-doctoral fellow.

In 1996, as a sophomore art student at Yale, Warren Jones wrote to several local special education schools asking for part-time teaching experience. Benhaven, a school for children with severe autism, was the first to respond. “I thought I’d be a recess monitor,” he recalls. “Instead they asked me, “How about teaching seven classes of art?’ It was serious trial-by-fire.”

Before Jones arrived, Benhaven had never had an art curriculum. The school’s administrators were immediately taken with his ingenuity. “He would come to us with a big new project idea, and would be so enthusiastic,” remembers Karen Helene, who was then a program coordinator at Benhaven. “And we’d sit there thinking, “Is he a little naïve? Will our kids really be able to do this?'”

On one occasion, Jones cordoned off part of the school gymnasium and hung large plastic tarps from the ceiling for a walk-through interactive art project. “This wasn’t 9-by-12-inch construction paper type of stuff,” Helene says. “He used a variety of materials to bring out their artistic expression.”

Even after a year of working at Benhaven, Jones knew little about autism’s biological roots. He signed up for an undergraduate seminar about autism, taught by the director of the Yale Child Study Center, Fred Volkmar. As one of his class assignments, Jones began analyzing the drawings of children with autism who had been treated at the center over the years.

Capturing how others see the world, and especially how his young students saw it, became the crux of Jones’ own sculptures. For instance, he built an eight-foot-long kaleidoscope mounted on a stationary bike so that pedaling made the colors spin. It was meant to show the world through the eyes of a young boy who was obsessed with kaleidoscopes.

For his senior thesis, Jones wanted to measure the actual visual perceptions of others while they watched films ― usually cloud scenes. Because eye-tracking technology was expensive, he instead tracked subjects’ head movements using mounted laser beams.

Later, a computer algorithm calculated which parts of the screen the laser beam had hit. Jones turned those “gaze patterns” into drawings. “This was literally their mental projections of the drawings they found in the clouds,” he says.

Klin, who sat on Jones’ thesis committee, was taken by the seeing machine. “I thought, now here is a kindred spirit,” Klin recalls. In the fall of 1999, they set up an ad hoc lab with no funding. Jones has stayed on ever since. “He’s been a colleague from the moment that he walked in here,” Klin says.

Klin and Jones finish each other’s sentences. They wear the same glasses, the same comb-over hair style, and on one April day, even the same blue collared shirt and khaki pants. Their heights ― the lanky Jones towers over Klin ― may be the only marked difference. “There’s a real synergy between them,” Helene says.

It’s in the eyes:

Late in 1999, a small donation from a parent allowed the duo to begin tracking the eye movements of people with autism as they looked at various kinds of stimuli ― starting with emotional scenes from the movie Who’s Afraid of Virginia Woolf?3

More recently, they’ve been repeating their experiments on infants as young as 3 months old, showing them videos of their mother in real time.

Of the dozens of babies they tested, an impressive 82 percent of 12-month-olds were successfully engaged by the experiments, and finished them without fussing or falling asleep. “That’s about as successful as anything you try to do,” Jones says. “I don’t think that feeding is even that successful.”

They attribute a lot of that success to one of their research assistants, Martha Dye, who worked for 26 years as the head daycare teacher of the infant and toddler group at the Yale-New Haven hospital. “She’s the repository of all tricks,” Jones says. “She does swaddling, and will coo them into watching the movies.”

Dye is more modest, saying Klin and Jones set the tone for the lab’s relaxed atmosphere. “I had no experience in research,” she says. “But their patience is amazing. Here you can grow and feel very comfortable asking questions.”

Since joining the lab last September, Dye is still moved by the obstacles that parents of children with autism face ― both in finding expert clinical care and in understanding how their child’s mind works.

Klin and Jones say they hope their research will tear down both obstacles.

As they do more eye-tracking experiments on younger infants ― particularly in siblings of children with autism who are at higher risk of the disorder ― they’re slowly building a developmental map that shows when subtle behavioral characteristics of autism arise.

If further studies bear out their early findings, these early symptoms could become routine diagnostic markers, they say. But the heart of their research continues to lie in revealing the visual and social perceptions of people with autism.

Beginning with their first maternal interactions, “The way [children with autism] develop their internal world is strikingly different,” Klin says. “By taking this artistic perspective, I think we’ll begin to grasp just how different that internal world is.”