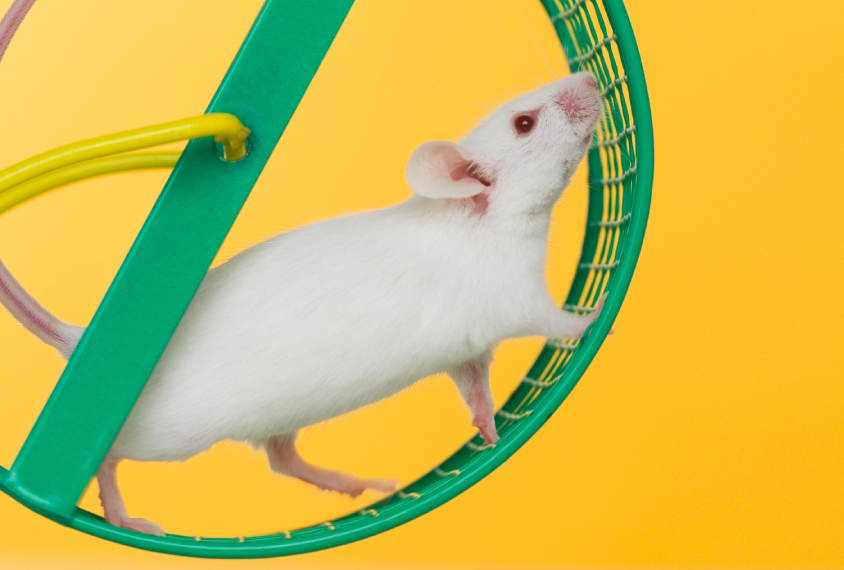 Ready to run: The pupils of Rett syndrome mice tend to remain enlarged, reflecting a state of high alertness.

Heart rate and pupil size can indicate a person or animal’s state of arousal, or level of alertness. The new work suggests that the pupils of a mouse model of Rett syndrome grow and shrink slowly as the animals become more or less aroused. The researchers used a parallel method to identify children with Rett syndrome. (Because pupil-size data were not readily available for children with Rett syndrome, they studied heart-rate fluctuations, which align with changes in pupil size2.)

Rett syndrome is closely related to autism, and if the results hold true in people with autism as well, heart-rate patterns could be used to flag young children for autism evaluation, says lead investigator Michela Fagiolini, associate professor of neurology at Boston Children’s Hospital. “It can be a way of investigating idiopathic autism and other genetic forms of autism.”

These measurements could also be used as a biomarker to track response to treatments.

“This is a truly groundbreaking piece of work,” says Alessandro Gozzi, senior researcher at the Istituto Italiano di Tecnologia in Genova, Italy, who was not involved in the study. “The use of cross-species measurements of arousal represents a simple yet powerful future avenue for early diagnosis of developmental disorders.”

The researchers tracked pupil size in three mouse models of autism as the mice ran or rested on a treadmill. One strain has a mutation in MECP2, the gene mutated in Rett syndrome; another lacks CDKL5, a gene linked to both Rett and autism; and the third is an asocial strain called BTBR. An infrared camera aimed at the animals’ eyes recorded for 30 minutes at a stretch.

The pupils of control mice typically measure about 0.3 millimeters across, reflecting low arousal. For brief periods when the animals become spontaneously aroused, the pupil size doubles.

In all three autism models, the pupils are much slower to dilate than they are in controls, and the mice stay in that dilated, aroused state for longer.

In mice with the MECP2 mutation throughout their bodies, this difference is apparent even before any Rett-like traits emerge. These mice also have an unusually slow pupillary response to light, but the difference appears only after other behavioral signs of the mutation.

The team also made mice that carry the mutation everywhere except in neurons that release and respond to a neurotransmitter called acetylcholine. The pupil response in these mice looks like that of controls — suggesting that acetylcholine underlies the effect.

Fagiolini’s team then looked at pupil size in mice that lack a protein called LYNX1 that regulates the receptor for acetylcholine. In these animals, pupil size changes even more slowly and stays that way longer than in any of the autism models. These findings, too, indicate a key role for acetylcholine in the effect.

Other studies have implicated acetylcholine signaling in autism and related conditions3. The new results add weight to this idea.

The researchers used the pupil data from LYNX1 and control mice to train an algorithm to distinguish among the arousal patterns. The program identified atypical arousal patterns in all the mouse models tested, the researchers say. As a group, the BTBR mice showed the strongest difference from controls.

“We were able to show that all three lines had a defect,” Fagiolini says.

The program picked out children who have the condition with about 80 percent accuracy, the researchers reported. The results appeared in July in the Proceedings of the National Academies of Sciences.

“It’s a fascinating study,” says Adam Guastella, professor of clinical psychology at the University of Sydney, who was not involved in the research. Pupil and heart-rate responses are unlikely to map neatly onto specific diagnoses, he cautions, but may still help flag problems in children with delays. “They might actually be useful for detecting altered neurodevelopmental trajectories,” he says.

The study’s biggest strength is that it uses a single algorithm for both mice and people, says Jed Elison, associate professor of child development at the University of Minnesota, who was not involved in the work. “The translational potential, and the translational proof of principle, is really stellar,” he says.

Fagiolini’s team is tracking pupil size in younger mice and in other autism mouse models to improve the precision of the algorithm. They also plan to gather pupil and heart-rate data starting at or before birth in children with autistic siblings to determine whether the algorithm works beyond Rett syndrome.