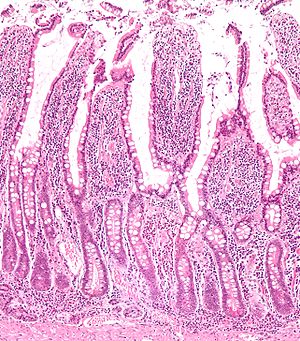 The hormone oxytocin modulates molecular pathways associated with autism in gut cells, according to unpublished research presented Saturday at the Society for Neuroscience annual meeting in New Orleans. The new study suggests a tantalizing link between oxytocin and the gastrointestinal symptoms seen in some children with autism.

Exposing gut cells to oxytocin, particularly at high doses, lowers the activity of mammalian target of rapamycin complex 1 (mTORC1), the researchers found. This collection of proteins acts as a major signaling hub inside cells, and dysfunction of mTORC1 in neurons has been implicated in autism.

Oxytocin is best known for its role in promoting attachment and social behavior, and some studies suggest that regulation of the hormone is disrupted in people with autism.

The researchers previously showed that oxytocin receptors are abundant on cells lining the gut of newborn rats1. “It’s got to be doing something extremely important” in the gut, says lead investigator Martha Welch, assistant professor of clinical psychiatry at Columbia University College of Physicians and Surgeons.

In the new study, Welch’s team dosed laboratory-grown cells derived from the large intestine with various concentrations of oxytocin, then tracked the abundance and activity of different proteins in the cell. They found that oxytocin regulates a pathway involving the signaling molecules PI3K, AKT and mTOR.

Oxytocin has previously been shown to interact with molecules in this pathway2, but the new study provides more details.

For example, exposure to oxytocin results in the addition of a phosphate group, a common biochemical ‘switch’ that turns proteins on and off, to a protein called Raptor. In turn, this phosphorylation of Raptor inhibits mTORC1.

Some effects of oxytocin depend on the dose. At a high dose of oxytocin, one form of AKT — known as pAkt (T308) — decreases, which in turn lowers the activity of mTORC1. But this decrease in pAkt (T308) isn’t seen at lower doses of the hormone.

Taken together, the results suggest that oxytocin helps regulate gut cell function, and may affect gastrointestinal symptoms in people with autism.

However, the dose dependence suggests the need for caution in using the hormone to treat autism, Welch says. Although gut cells need some oxytocin for proper development and function, “too much is a totally different thing.”

For more reports from the 2012 Society for Neuroscience meeting, please click here.