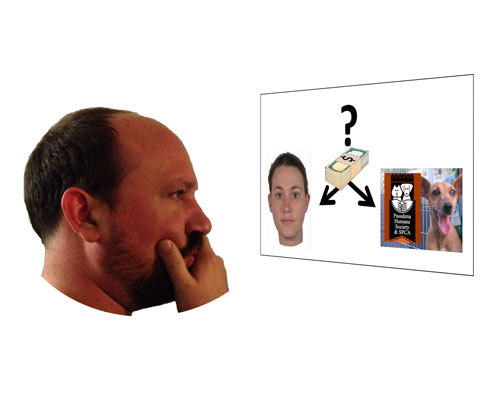 A new way to evaluate theory of mind, the ability to imagine what others are thinking or feeling, shows promise for teasing apart the different aspects of this complex mental process, according to a poster presented Tuesday at the Society for Neuroscience annual meeting in New Orleans.

The test suggests that predicting a person’s actions and inferring the person’s beliefs and mental state may each involve slightly different skills.

People with autism struggle to guess others’ thoughts and feelings. However, some high-functioning individuals with the disorder can pass common theory of mind tests in a laboratory setting.

One problem with the tests is that they tend to be static, asking people to respond to a single scene or short narrative, says Damian Stanley, a postdoctoral scholar in neuroeconomics at the California Institute of Technology, who presented the work. “In real life, we go around and we learn about people over time,” he says.

Stanley and his colleagues designed their test to try to capture this real-world quality. They came up with a kind of game involving two people, the Agent and the Mentalizer (whose theory of mind abilities are being tested).

The Agent — let’s call her Jane — has to decide whether to keep a sum of money or give it to one of three charities. The hitch is that after Jane makes her choice, a computer algorithm sometimes reverses her decision, and she doesn’t know how often this will happen. So she has to learn and adjust her behavior based on the results of recent trials.

The Mentalizer is told how often the computer will reverse Jane’s decision. The task is to predict which outcome Jane wants, how often she thinks her decision will be reversed and what she will do with the money.

“You have to keep this representation of Jane in your head while you’re learning about her,” Stanley says. He says this is a closer approximation of how theory of mind works in real life.

Stanley acknowledges that the setup sounds complicated, but says, “Once you start doing the task, you really just fall into it.”

The team has tried out their new test on a handful of people, including four with high-functioning autism, and all were able to follow the rules of the game.

Like controls, the high-functioning individuals with autism are able to predict what Jane will do next and identify how often she thinks her choice will be reversed. However, Stanley says, “People with autism are not as good at predicting what Jane wants.”

It may be, then, that predicting a person’s actions requires different skills than inferring her mental state.

Though preliminary, the data hint that the test might help researchers zero in on which cognitive processes involved in theory of mind pose a problem for people with autism.

The researchers need to give many more people, both with and without autism, the test, to refine the methodology. Eventually, they aim to combine the test with imaging studies to locate the different theory of mind processes in specific parts of the brain. “We can take this model and go and look in the brain for signals that correspond to different aspects of theory of mind,” Stanley says.