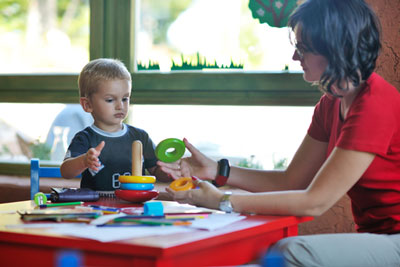 Earlier this month, two groups of scientists whose paths don’t often cross — psychologists and engineers — converged at the University of Southern California in Los Angeles for the Engineering and Autism conference.

The conference’s goal was to highlight emerging technology and software that may help assess the subtle behaviors, such as gaze or social gestures, that go awry in children with autism.

When diagnosing a child, psychologists typically watch live or recorded sessions of the child, noting specific behaviors. But each psychologist might score those behaviors differently, noted Ted Hutman, professor of psychiatry and biobehavioral science at the University of California, Los Angeles (UCLA). Automated tools would minimize subjective bias and help standardize these assessments, he said.

Automated tools might also help pick up on subtle changes that some tests now in use may miss.

Connie Kasari, professor of psychological studies in education and psychiatry at UCLA, gave the example of a child who was nonverbal at the start of a study in her lab but had a nonverbal intelligence quotient (IQ) above 100.

Over the course of the study, the child’s IQ didn’t change, and his scores on expressive language tests decreased because he had grown older. But in fact he was able to use a simple sentence to ask for a ball, something he had never done before.

“Automated or creative measures are needed to measure changes that are meaningful and at times small,” Kasari told SFARI.org. “Standardized tests are not so meaningful for our minimally verbal kids.”

The reverse can happen as well, she pointed out. Some therapies may improve scores on standardized tests but have no effect on social relationships.

Automated screening may be particularly helpful for assessing early risk, especially in baby sibs — infants who have a sibling with autism and have a 20 percent chance of developing it themselves.

Clinicians can reliably detect autism around 24 months of age, although a formal diagnosis is usually only possible at 30 to 36 months. Parents often report their first concerns around 16 to 18 months. Because behavioral therapies seem to work better the earlier they are delivered, shifting the age of diagnosis back even six months might have a significant impact.

Restricted and repetitive behaviors, one of the hallmarks of autism, are not a reliable indicator of autism in children younger than 24 months, said Wendy Stone, director of the Autism Center at the University of Washington in Seattle. “So we must rely on social reciprocity,” or mutual responsiveness between two people, she said at the conference.

Typically developing babies show joint attention, or shared focus between two people, around 6 months of age. “But do parents know what that means, and can they use it to judge their child’s development?” says Stone. “It just isn’t as concrete, familiar or measurable as the milestones we have for walking or talking.”

In terms of predicting who will go on to develop autism, the strongest data are for social orienting — the tendency to spontaneously pay attention to social stimuli in the environment — and joint attention, Stone said at the conference. “We have strong evidence that by 12 to 18 months, impairments in these behaviors can predict diagnosis.” Some studies suggest these behaviors are predictive at 6 months as well, but none of these have been replicated yet.

One potential tool for early screening is the LENA system, which includes a small recording device that babies and toddlers wear. Researchers analyze the recorded data to look for differences in vocalization between typically developing children and those with autism or language delay.

Kimbrough Oller, professor of communication science and disorders at the University of Memphis in Tennessee, has shown that LENA can distinguish children with autism or language delay at 10 to 48 months of age1. His approach focuses on canonical babbling, a stage of language development in which babies repeat certain syllables, before they begin to speak.

“If we can begin to acquire recordings, we may be able to find some ways to detect [autism] purely on vocalizations,” he says. “This and our other data show there is hope for early automated detection.”

Jill Gilkerson, language research director at the LENA Research Foundation, a nonprofit that developed the device, says some of the foundation’s collaborators are recording data from 9-month-old baby sibs.

Though researchers have found some behavioral differences in high-risk infants, Stone cautions against over-interpreting those results. “We find group differences in baby sibs,” she said at the conference, “but if we weren’t looking at them with concern, would we notice?”

For more reports from the Engineering and Autism 2012 conference, please click here.