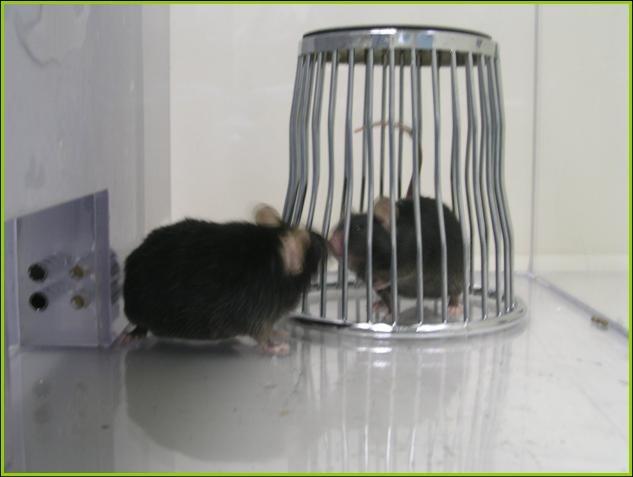 Normal as can be: Mice with a mutation in neuroligin-3 sniff, follow, groom and explore other mice as much as controls do, a new study has found.

Directly contradicting a report of a promising autism mouse model, mice carrying a mutation in the neuroligin-3 gene show no signs of the disorder, according to a study published in Autism Research 1.

The study, published in June, has left researchers in the field struggling to reconcile the results with those of a high-profile paper published last year in Science. That paper found that the same mutation in neuroligin-3 causes mice to show abnormal social behaviors2.

“This new paper definitely has to be taken very seriously,” says Nils Brose, director of the Max Planck Institute for Experimental Medicine in Göttingen, Germany, who was not involved in either study.

Brose also investigates neuroligin mutations in mouse models of autism3, and he says that the differences between these two papers are important to resolve. “It cannot necessarily be explained by one lab did everything wrong while the other did everything right,” he says.

Neuroligin-3 is one of several molecules involved in synapse formation. Mutations in the protein were first discovered in 2003 in two Swedish brothers with autism4. The brothers carry a single amino acid change that leaves the neuroligin-3 protein prone to getting stuck in the endoplasmic reticulum, the cell’s protein manufacturing plant, and preventing most of it from getting to the synapse.

“Everyone was kind of excited thinking that this could be one potential single gene responsible for some cases of autism,” says Kathryn Chadman, first author of the new study, and a research scientist at New York State Institute for Basic Research in Developmental Disabilities.

Chadman conducted the research as a postdoctoral fellow in the lab of Jacqueline Crawley, at the National Institute of Mental Health.

Using a huge battery of tests, Chadman and her colleagues probed the miceʼs behaviors relevant to all three domains of autism symptoms ― social interaction, communication and repetitive behaviors.

Those with the neuroligin-3 mutation sniff, follow, groom and explore other mice as much as the controls do. They also show normal spatial learning and development.

“They weren’t any different from the wildtype mice,” Chadman says. “I’m very confident in these data,” she adds, citing the high numbers of animals used in the study.

Those results are at odds with those from a study led by Thomas Südhof professor of molecular and cellular physiology at Stanford University. Südhof reported last year that mice with the mutation have impaired social interactions, but are better at spatial learning than are normal mice.

“This is an interesting paper with a lot of carefully done behavioral studies,” Südhof says of the new study.

The differences in behavior in his own model could stem from the different strains of mice used in the two studies, he says.

It’s an enduring worry in the world of transgenic mice: the effects of an introduced mutation can sometimes be masked by the variations of a gene, or alleles, found in one strain, but not in another.

“That’s the most straightforward explanation,” says Brose. “These kinds of discrepancies between labs in behavioral studies have happened before.”

But Chadman says the differences could stem instead from the behavioral tests that Südhof and his colleagues used, and the way they analyzed the results.

For example, given a choice, normal mice prefer to interact with a caged mouse rather than with an inanimate object. In both studies using the same task, the neuroligin-3 mutant mice spend a longer time with the caged mouse than with an object.

But instead of documenting this as a normal preference, Südhof’s study selectively focused on how long the mutant mice spend with a caged mouse, finding it is less time than controls spend, Chadman says. “I’m not in love with the way they did their statistics.”

Still, Südhof notes that the brains of the mice from the two studies may be different, which could explain any differences in behavior. His study finds, for example, that the mutation decreases neuroligin-3 protein levels and strengthens inhibitory synapses. Whether Chadmanʼs mice have the same features is as yet unknown.

To settle these differences, Brose suggests that the Crawley lab test the mice used in Südhof’s study. “Itʼs the only way to resolve this,” he says.