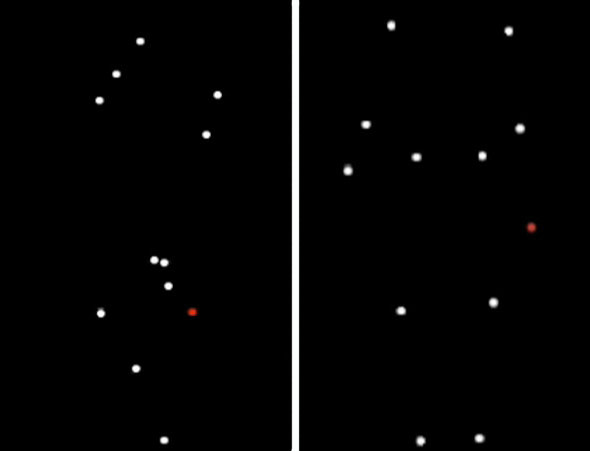 Getting physical: Healthy males and people with autism have more trouble recognizing human movement than do healthy women.

People with autism are slower than controls at interpreting emotions expressed by physical movement, researchers reported Wednesday at the Society for Neuroscience annual meeting in San Diego.

Men are also slower than women to recognize human bodies in motion, so these results support the ‘extreme male brain’ theory, which holds that autism is an exaggeration of certain aspects of the male brain.

Studies have shown that people with autism are not particularly sensitive to the movement of other people and animals. Unlike healthy controls, they detect the motion of objects with the same ease as the motion of people, and they pay no more attention to scenes of people shown upright than to people shown upside down.

In the new study, two actors — one male and one female — walked, kicked a ball and jumped up and down as a camera captured data from sensors affixed to various points on their bodies. Motion-capture software translated these images into ‘points of light’ that depict the bodies in motion as the actors performed these movements neutrally and with feeling — happy, sad or angry.

The researchers then showed these videos and another set of scrambled, random point-of-light images to 27 healthy men and women. They found that the men do not do as well as the women in distinguishing between biological and random movement.

“The women were much quicker to recognize which were people than the men,” says Nicole Wenderoth, professor of kinesiology at Katholieke Universiteit Leuven in Belgium.

Both men and women were, however, able to correctly identify which emotions the actors were expressing.

In their next experiment, the researchers played the same videos to 12 people with autism and 12 normal controls. All were adults in their early 30s and had roughly similar intelligence quotient scores of 115.

The participants with autism had more trouble than controls distinguishing between the videos depicting people in motion and the random images. They also had more difficulty identifying the emotions being expressed by the actors.

“There was a strong correlation between participants’ scores on the Social Responsiveness Scale and their ability to correctly identify emotion in the videos,” says Kaat Alaerts, a postdoctoral fellow in Wenderoth’s lab who designed the experiments.

The same was true when the researchers compared the results from those with autism to their scores on the ‘Reading the Mind in the Eyes’ test developed by Simon Baron-Cohen, professor of developmental psychopathology at the University of Cambridge. In that test of emotional recognition, people look at a series of photos of eyes and choose a word to describe the emotion being expressed in the photo.

“There seems to be a link between reading facial expression in the eyes and biological motion,” says Alaerts, adding that people with autism seem to have difficulty with both.