This approach of honing in on an individual geneʼs effect on the mouse brain, experts predict, will become more common as scientists identify more copy number variations (CNVs) ― duplications or deletions of a stretch of DNA ― relevant to schizophrenia and autism.

In the past year, geneticists have identified 20 unique CNVs by scanning the genomes of people with spontaneous ― or non-inherited ― schizophrenia. Some of these variations are so rare they may occur only in a single individual. Others, such as microdeletions in the 22q11 chromosomal region, are more widespread.

“In two percent of every cohort that has ever been looked at, you will find the 22q11 deletion,” says Maria Karayiorgou, professor of psychiatry at Columbia University Medical Center who, along with Joseph Gogos, led the new study.

Karayiorgou and Gogos were the first to show, in 1995, that the microdeletion in 22q11 exists at higher frequencies in people with schizophrenia than in healthy controls2.

The 22q11 microdeletion disrupts about 27 genes. In 2004, the researchers singled out one of these, ZDHHC8, as a good candidate gene for schizophrenia3. ZDHHC8 is known to add fatty acids to groups of proteins, but the researchers didnʼt know how disrupting the gene would affect the brain.

In their most recent experiments, the researchers made two mouse models: one that lacks the entire 22q11 region and another that is missing only ZDHHC8. Mice that model the entire microdeletion have some working memory deficits, fewer excitatory synapses and fewer dendritic spines ― the tree-like extensions of the neuron that receive signals from other neurons ― than do normal mice. 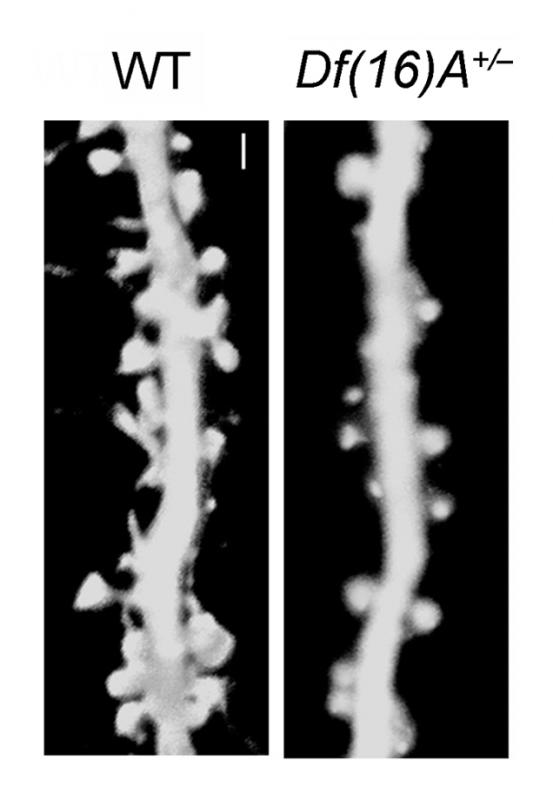 
Bare branches: Neurons from the mice lacking the 22q11 chromosomal region (right) have spines of less density than controls (left).

“Poverty of dendrites and dendritic spines is something that has been seen in schizophrenic brains as well,” Karayiorgou says. “So this indicates that this microdeletion captures a real neuronal phenotype thatʼs been associated with the disease.”

The researchers found the same abnormalities in the ZDHHC8 knockout mice. When they provided the ZDHHC8 protein to neurons harvested from the 22q11 knockout ― a so-called ‘rescue experimentʼ ― the abnormalities disappeared, implicating ZDHHC8 as an essential player in the 22q11 deletion.

The researchers also found that on the receiving side of the synapse, ZDHHC8 interacts with PSD95, a scaffolding protein that helps hold the synapse together, and that might prove to be a good drug target for schizophrenia.

The results do not mean, however, that ZDHHC8 is the only gene in the region that is important in schizophrenia, Karayiorgou notes. “We are convinced at this point that this is not a one-gene story,” she says.

Other experts are even more cautious, noting that the region includes several genes, including PRODH4, COMT5, and RanBP16, which have been associated with schizophrenia risk.

“Thereʼs no shortage of good candidates in that region,” says David St Clair, professor of psychiatry and genetics at the University of Aberdeen, and a member of the SGENE European consortium of scientists that is looking for schizophrenia CNVs.

“Whether the data that the Columbia group is showing convinces you that they found a key schizophrenia gene, or just found a gene thatʼs causing something to go wrong with dendrites is a key question,” St Clair says.

Karayiorgou and Gogos plan to repeat the mouse experiments with other deletions implicated in schizophrenia and assess their effects on the brain.

Other groups are also likely to perform such experiments on CNVs implicated in both schizophrenia and autism. Since last year, hundreds of de novo CNVs have been identified in people with autism.

“Iʼm a strong believer in the power of these de novo CNVs,” Karayiorgou says. “They give tremendous insights into disease pathophysiology and have great potential for drug development.”