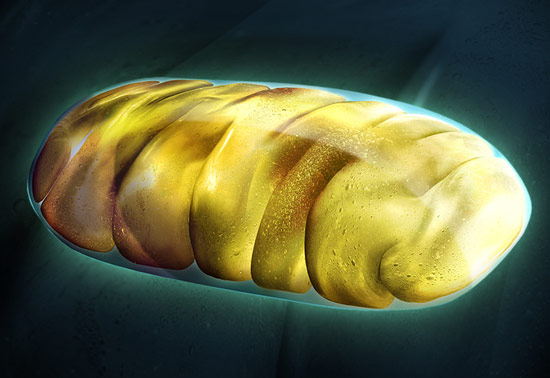 Genomics Digital Lab, produced by Spongelab Interactive Power houses: At least five American labs are testing children for a wide range of mitochondrial defects as well as for autism.

Using new genetic screening technology, a few research groups are finding that a surprisingly large number of children with autism — at least five percent — have an underlying problem with their mitochondria, the energy factories of the cell.

If confirmed by larger studies, these preliminary results point to intriguing pathways, such as those involved in calcium-ion signaling, that go awry in the subgroup of children, the researchers say.

It’s unclear, however, whether mitochondrial defects are the primary causes of the disorder.

“This contributes to this general idea that you need multiple hits in order to get autism,” notes Ricardo Dolmetsch, assistant professor of neurobiology at Stanford University School of Medicine, who was not involved in the new studies.

About 1 in 4,000 people carries defects in their mitochondria. These defects come in hundreds of different forms, leading to symptoms of varying severity depending on which tissues are affected.

Subsequent reports from a Portuguese group, analyzing a total of 279 children with autism, found that between 17 and 20 percent of the children have similar metabolic signatures in their blood and urine3,4.

The only way to definitively diagnose a mitochondrial disorder, however, is to find specific defects in the 2,000-odd genes that code for mitochondrial proteins — an expensive, time-consuming process that has rarely been done in studies of children with autism5.

Now, with many times more samples than in previous years, at least five American labs are testing children for a wide range of mitochondrial defects as well as for autism or autistic symptoms. Two of these labs have released some early data.

This year alone, the Mitochondrial Diagnostic Laboratory at Baylor College of Medicine has screened samples from about 8,000 people suspected of having mitochondrial disease.

Analyzing records of 4,194 samples sent to the lab between 2005 and early 2009, lab director Lee-Jun Wong found that 276 exhibit features of autism. Within this group, the researchers found 14 children — about five percent — with mitochondrial defects, according to data Wong presented on 22 October at the American Society of Human Genetics annual meeting in Honolulu, Hawaii.

Dolmetsch notes, however, that most people with mitochondrial disease have some kind of neurodevelopmental impairment, which could easily be confused with low-functioning autism.

“Five percent is sort of in the diagnostic noise,” he says. “I suspect that at least part of the association comes from the fact that at the low end of the spectrum, the definition of autism gets really fuzzy.” Wong says more comprehensive screenings will probably show that the number is actually much higher than five percent.

“We suspect that a lot more of these 276 patients also have mitochondrial disorders, but we are not looking at the right genes,” she says.

Adding to this complexity, cells harbor several hundred mitochondria, each of which can carry different genetic variants. If alleles are mutated in fewer than 20 percent of the mitochondria, available technologies can’t detect them.

In October, a group from the University of Washington published a method for next-generation screening of mitochondrial disorders6. Their technique reads the entire mitochondrial genome and 362 genes of the nuclear genome known to cause mitochondrial disease. It can also pinpoint new, potentially causal, mutations.

Wong’s lab is developing a similar, “more comprehensive” sequencing technology that can detect hundreds of thousands of gene mutations related to mitochondrial disorders, she says. With this new tool, which will be ready within a year, she estimates that up to 30 percent of the children with autism in her sample will have identifiable mitochondrial defects.

Although some researchers have been trying to unravel the link between autism and mitochondria for years, a high-profile court case kicked the work into high gear. In March 2008, the federal ‘Vaccine Court‘ ruled that 9-year-old Hannah Poling, of Georgia, developed autism because childhood vaccinations triggered her underlying mitochondrial disorder.

Of the thousands of cases brought against the federal government claiming that vaccines cause autism, the Poling family became the first to receive government compensation. The settlement spurred a dramatic rise in inquiries from parents about mitochondrial disorders.

“It was like a sea change,” says Jay Gargus, professor of physiology and biophysics at the University of California, Irvine.

Gargus has been studying mitochondrial disorders for nearly two decades, and is part of a team looking for defects in mitochondrial proteins and metabolic processes in 200 children with autism. “With the Poling case, I think it came to be recognized that these mitochondrial signals weren’t just for these very rare cases, but that they may well be an important component of the run-of-the-mill [autism],” he says.

Atlanta-based Medical Neurogenetics is also releasing data on the subgroup of children who have both autism and mitochondrial disease. Founder John Shoffner, a neurologist and geneticist, says that in the past 20 years, he has seen more than 100 children, including Hannah Poling, who have both disorders.

In September, Shoffner reported that of 28 children with both autism and mitochondrial disorders, 17 went through autistic regression — sudden loss of speech, eye contact, or social interests7. Of that group, 12 did so within two weeks of having a fever.

Because the fever in four of those cases was caused by vaccination, many anti-vaccine proponents say that Shoffner’s research suggests a mechanism for how vaccines might trigger autism.

Shoffner himself says vaccines are just one of many ways to cause a fever. “If the fever is prolonged, poorly treated, and probably associated with dehydration, then that is the substrate for increased risk of neurologic change.”

The idea of fever as a trigger for metabolic diseases, including mitochondrial disease, is nothing new, according to Gargus. “The story for these kids is, they have a genetic lesion, presumably what they were born with, and they’re fine until they hit some critical stress — and then they fall off a cliff,” he says.

“It terrifies me that people will be making arguments [from this work] that further enhance the panic about vaccines,” Gargus adds. “Obviously, getting a vaccination will sometimes give you a fever, but the kid’s going to get a fever sooner or later anyway. It’s not like it’s a special fever.”

Shoffner’s report characterizes all 28 children with specific mitochondrial defects — meaning that his team has found the specific enzymatic or genetic problem that’s causing their disease. These defects are notoriously difficult to find, and Shoffner says an explanation of the methodology used will be included in a subsequent manuscript.

But others are skeptical.

Gargus says he doesn’t believe Shoffner was able to demonstrate a specific defect in so many children, particularly because the paper does not explain his methodology.

“When one dives into a pool of kids with a complex phenotype, a home run is finding an explanatory defect in, say, 10 percent,” Gargus says. “One never sees a real study where one goes in and, lo and behold, it explains everything.”

Shoffner says his team will publish all necessary details, as well as results from genetic screens of an unspecified number of these children, in a future paper. He says his team is finding interesting genetic underpinnings in the children’s mitochondrial DNA, and is beginning to run next-generation sequencing to look for more subtle variations in nuclear DNA.

Gargus says the rising number of children identified with both mitochondrial disorders and autism could be explained by abnormal signaling of calcium ions.

Calcium ions, flowing in and out of calcium channels in a cell membrane, are required for brain cells to fire. Many independent reports have shown unusually high rates of calcium channel defects in people with autism-related disorders.

For example, Timothy syndrome — a rare developmental disorder leading to heart defects and autism symptoms — stems from mutations in the CACNA1C gene, which codes for a type of calcium channel expressed in the brain. Earlier this year, researchers found that a common variant of a gene in the same calcium channel family, CACNA1G, increases the risk of developing autism8.

A mitochondrial defect could directly lead to abnormal calcium signaling and brain cell communication, Gargus argues. Conversely, if defective channels are leaking calcium, “the mitochondria will be so busy sopping up calcium that you end up with a secondary ATP deficiency,” he says.

Although that’s a plausible theory, the precise mechanisms linking calcium signaling and mitochondria are unclear, says Dolmetsch. “The importance of the mitochondria in regulating calcium in an intact animal has never been looked at,” he says.

Further complicating the link between mitochondria, calcium signaling and autism, unpublished data presented at the Society for Neuroscience meeting in October found two variants in the SLC25A12 gene that lower the risk of autism. The gene codes for a mitochondrial protein that is activated by changes in cellular calcium. In 2004, another genetic study found that carrying other variants in SLC25A12 increases the risk of developing autism, though this has not been confirmed10.

“In many cases, it may not be primary, but I think [this defect] does have major secondary consequences,” says Antonio Persico, professor of physiology at Campus Bio-Medico University in Rome. “[It could] have a major impact on whether you will get full-blown autism, be less severely affected or maybe be an unaffected sibling.”

To test the role of energy metabolism in autism, Gargus is measuring the chemical composition of the breath of children with autism after exercise on a stationary bicycle. Only eight children with autism have been tested so far, but spectroscopic analysis has found metabolic peaks that are different than those in healthy controls, he says.

His team hopes to tie together these biochemical data with specific genetic mutations to see what combinations lead to autism.

“It’s pretty compelling that you start pulling together what started out as very disparate lines of evidence,” Gargus says. “But now, if we can pull them into one consolidated mechanism, it becomes an interesting story.”