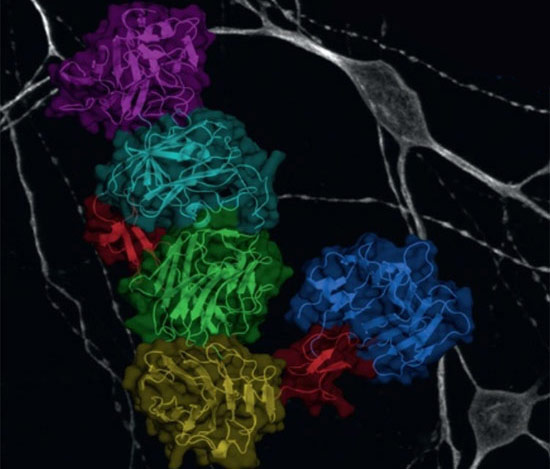 Helpful hinge: An important region (blue) of the NRXN1 protein is connected to the rest of the protein by a flexible linker (red).

Neurexin 1, an autism-associated protein that functions at the junctions between neurons, has a flexible hinge that can toggle the protein between a more compact or a more accessible shape, a crystal structure published 8 June in Structure reveals1.

This three-dimensional structure will allow researchers to investigate how mutations associated with autism alter the protein’s interactions.

Neurexins bridge the inside and outside of neurons at the transmitting ends of synapses — the junctions between neurons. They bind to proteins called neuroligins at the receiving ends of adjacent neurons. These connections help regulate both neuronal signaling and synaptic plasticity, a process that strengthens neuronal connections in response to learning and memory.

Mutations in neurexins and neuroligins, and in particular NRXN1, are associated with autism. Mice lacking the gene groom themselves obsessively.

Protein formed from the entire length of the NRXN1 gene is called the alpha isoform, and that from a shorter version of the gene is the beta isoform. The two versions differ in how much of the protein is exposed to the synapse, allowing NRXN1 to interact with a range of binding partners.

In the new study, researchers induced large amounts of the alpha isoform to form crystals, allowing them to model its structure.

The alpha isoform has six independently folded regions, or domains, that are exposed to the synapse. Of these, two, LNS2 and LNS6, are believed to bind to other proteins. Together, the six domains form an ‘L’ shape with one long and one short arm. The short arm is composed of LNS6, the domain that contains the neuroligin-binding site, and connects to the other arm by a flexible linker region.

This flexibility allows the alpha isoform to take on an optimal shape for binding to neuroligins while remaining as compact as possible in the limited synaptic space, the study suggests.