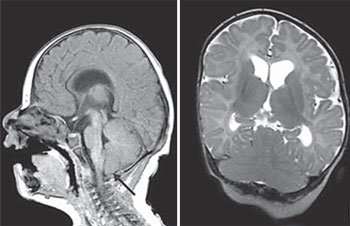 Altered image: A boy lacking the autism-linked TBR1 has brain tissue in the spinal canal (left) and abnormalities in the cortex (right).

Loss of one copy of TBR1, an autism-linked gene involved in fetal brain development, leads to brain malformations, according to a study published in the September issue of Molecular Syndromology1.

TBR1 regulates the development of the cortex — a brain region involved in higher-order cognitive functions — by controlling the expression of other genes. These include the autism candidates RELN and AUTS2. One of TBR1’s primary roles is directing the number and location of neurons that inhibit brain signals. Neurons in the cortices of mice lacking both copies of the gene are located in the wrong brain layers.

A study published this month in Science found that TBR1 is one of six genes that together may account for up to one percent of cases of autism.

In the Molecular Syndromology study, researchers characterized four boys who have a deletion of the 2q24 chromosomal region, which that encompasses the TBR1 gene. All four boys have intellectual disability and developmental delay. One 8-year-old has a diagnosis of pervasive developmental disorder–not otherwise specified, and a 33-month-old has features of autism.

All four boys have brain malformations, but of varying severity. Two of them have a thick corpus callosum, which connects the brain’s hemispheres. One of these two boys, and a third, have Chiari malformations, in which brain tissue enters into the spinal canal. All four have slightly dilated ventricles, brain structures that contain cerebrospinal fluid.

Only one of the four, a boy who died at 16 months of age (probably as the result of a seizure) has abnormalities in the cortex. Together, the results suggest that TBR1 only affects development of the cortex in combination with other genetic risk factors.