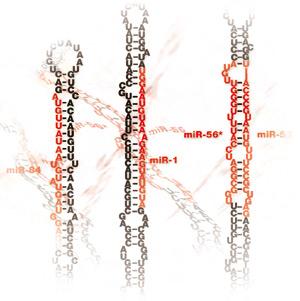 Micro effects: Some microRNAs are under expressed in schizophrenia and bipolar disorder.

Some small fragments of RNA, called microRNAs, are under-expressed in people with schizophrenia and bipolar disorder compared with controls, according to unpublished research based on postmortem brain tissue presented this morning at the Society for Neuroscience meeting.

Schizophrenia and bipolar disorder each affect about one percent of the population, and recent genetic studies have shown some similarities between the two disorders.

For both disorders, studies have identified large ‘linkage peaksʼ ― relatively large regions of the genome that are similar in individuals with that disorder, but different compared with controls. However, scientists have had trouble pinpointing genes within those regions that are strongly associated with disease.

“That got us thinking whether we need to start looking at other types of genetic elements, things like microRNAs,” said Linda Brzustowicz, professor of genetics at Rutgers University.

MicroRNAs have wide-ranging, subtle effects on the production of many different proteins without affecting a cell’s underlying DNA code. The microRNAs that are under-expressed in bipolar disorder came from non-protein-encoding genes that lie within linkage peaks, suggesting that microRNA regulation, rather than specific genetic mutations, causes the disease, Brzustowicz reported today.

Some of the linkage peaks fall over “gene deserts” with only a couple of protein-coding genes, she noted. “That means there’s a lot of DNA there that doesn’t code proteins, that’s presumably making some sort of regulatory RNAs,” she said. “People have sort of neglected some of those sequences and focused on ‘traditional’ protein-coding genes first.”

The postmortem tissue came from the Stanley Array collection, which includes samples collected between 1995 and 2002 from 35 individuals with schizophrenia, 35 with bipolar disorder, and 35 healthy controls. Each sample is accompanied by detailed demographic and medical information.

Searching these 105 samples for expression differences among 234 different microRNAs in the prefrontal cortex, Brzustowicz found at least 17 that are under-expressed in the bipolar group, and 1 in the schizophrenia group, compared with controls.

A study last year of 15 individuals with schizophrenia identified 15 under-expressed miRNAs; only one of these, mi-92, is also under-expressed in Brzustowicz’s samples, but not to statistical significance.

Brzustowicz’s team also found that microRNA expression in both schizophrenia and bipolar populations is significantly affected by the kind of antidepressant or antipsychotic medications the patients had taken in their lifetime.

miRNA expression in both disease groups is also affected by how long the brain tissue is stored after death. “I can’t stress enough that sample co-variants are really important,” Brzustowicz said. “What happens to your tissue before you analyze it can make a big difference in your results.”