Men and women process faces in different parts of the brain 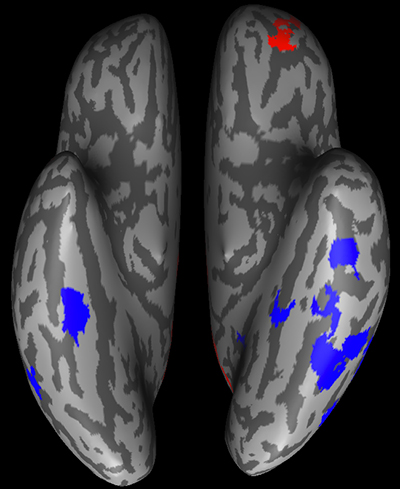 Conventional wisdom about how men and women process images of faces may be wrong, with significant implications for autism research, suggests an analysis of unpublished brain imaging data presented at the 2013 Society for Neuroscience annual meeting in San Diego.

The new study investigates the commonly held view that women are better than men at recognizing faces.

Researchers tested the ability to recognize and remember faces in 21 men and 21 women. “We did not replicate the finding that females are better at recognizing faces,” says Natalie Garcia, a graduate student in Suzy Scherf’s lab at Pennsylvania State University who presented the work.

Although the sexes are equally adept at recognizing faces, they use different neural pathways to get there, the study found.

The researchers scanned the brains of the participants as they watched short movies featuring faces, objects or scenes. They then mapped the areas of the brain that activate in response to each of these.

Other functional magnetic resonance imaging studies have compared activity between men and women in the core areas of the face-processing system, such as the fusiform face area (FFA), located in the temporal lobe. But this is the first study to look across the whole brain, the researchers say.

“To date, there are no reports in the literature showing males have greater activation” in any part of the face-processing network, Garcia points out.

The researchers also examined connectivity between different parts of the face-processing network in men and women. “The hub in each connectivity network is different,” Garcia says. In women, the hub is the right FFA, and the network is stronger in the right hemisphere of the brain. In men, the STS serves as the main hub, and the strength of connections is more evenly distributed across the two hemispheres.

These findings may be relevant to autism research, given that face-processing deficits have been identified in people with the disorder, and autism is four times more common in males than in females.

Lisa Whyte, a postdoctoral fellow in the Scherf lab, says the team has data suggesting that in typically developing adolescent boys, the face-processing network looks more like that of adult women, whereas in adolescent boys with autism it is more like that of adult men. The network “looks more male than it should” among the boys with autism, Whyte says.

Those findings, while preliminary, are intriguingly in line with the ‘extreme male brain’ hypothesis, the notion that autism is an exaggeration of normal sex differences in cognition, Garcia says.