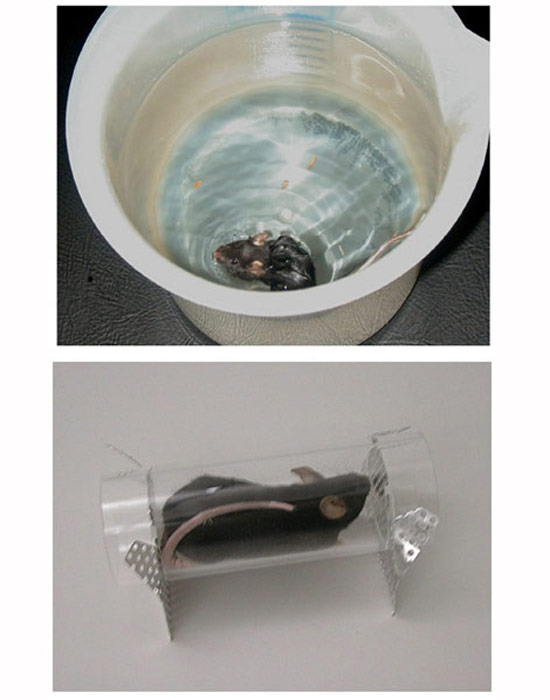 Forced separation: Offspring of mothers restrained in a box or compelled to swim in a beaker of cold water show gene expression changes that are passed down to their descendants.

Forced separation: Offspring of mothers restrained in a box or compelled to swim in a beaker of cold water show gene expression changes that are passed down to their descendants.

Preventing mothers from nurturing their pups alters social behavior and gene expression in the following three generations of mice, according to research presented 13 April at the Wiring the Brain meeting held outside Dublin, Ireland.

This first clear demonstration of the ways that early trauma marks successive generations suggests a partial explanation for the ‘hidden heritability’ puzzle in complex neuropsychiatric disorders, including autism.

Genetic analysis turns up only a few risk factors for these complex disorders. Even among those who carry known risk factors, the disorders often manifest differently.

The new study shows that environmental factors can directly alter gene expression, indicating the importance of gene-environment interactions in disorders such as autism and schizophrenia.

The researchers separated female rodents from their pups for up to three hours a day in random 15-minute intervals for two weeks early in postnatal life. Later in life, these pups show social deficits and behaviors reminiscent of both depression and impulsivity in humans.

Genes that modulate anxiety, such as CRFR2, and genes known to be important for epigenetic regulation — including MeCP2, the gene responsible for Rett syndrome — are either over-expressed or under-expressed in three generations of offspring, says lead investigator Isabelle Mansuy, professor of molecular cognition at the University of Zurich Swiss Federal Institute of Technology.

“Molecular analysis shows persistent changes in the expression of several genes in male and female offspring,” says Mansuy. She observed the changes in both germ cells and brains of adult offspring.

Social behavior is more severely affected in the males, she says, whereas females are more likely to show behaviors reminiscent of helplessness and depression.

Interestingly, some male offspring do not show behavioral effects themselves, but appear to transmit the epigenetic changes, and associated behaviors, to their daughters.

Handling female mice while their pups are feeding has previously been shown to increase anxiety in their offspring throughout their lives. This is thought to result from methylation of the receptor gene for oxytocin, a hormone involved in social and maternal bonding and trust.

Studies have found significantly lower levels of oxytocin in the blood of children with autism compared with controls. Epigenetic changes in OXTR, the oxytocin receptor, have also been reported in people with autism.

Mice used in the new study are known to be excellent nurturers of their offspring. This perhaps amplified the level of stress they felt when they were chronically and unpredictably separated from their pups, says Mansuy. During the periods of separation, the mothers were either restrained in a box or compelled to swim in a beaker of cold water, while the pups were left alone in their cages.

Researchers waited until the offspring were 3 months of age — young adulthood in mouse years — and then until the mice reached 1.5 years, a geriatric age in mice, to assess their behavior. Behavioral consequences of maternal deprivation and stress worsen with age, the study found.

Male offspring show more severe social deficits — for example, a lack of interest in new animals introduced into their cages. Females show interest in new cage-mates but fail to recognize animals previously introduced into their cages. Females also show more symptoms of depression. When immersed in a beaker of water, rather than swimming, they tend to give up and float faster than do typical animals.

Both male and female offspring of the stressed mothers are much more impulsive than are typical controls.

Treatment with antidepressants improves social behavior in the animals. Strikingly, so does placing the animals in enriched housing environments with eight to ten same-sex companions, mazes and toys.

Mansuy also found altered methylation in the CpG islands — genomic regions that tend to be located near sites where gene expression is initiated — of approximately 250 genes. Among these genes are CRFR2 — which helps maintain homeostasis in response to stress — and MeCP2. Genes associated with the modulation of synaptic strength are also affected, as is OXTR — although that observation still needs to be confirmed.

By contrast, gene-environment interactions are not as well studied in autism, he says, though factors like urbanization and migration may raise the risk (and prevalence) of autism as well.

“Genetic effects are subtle,” he says. “[But] these things are sledgehammers.”