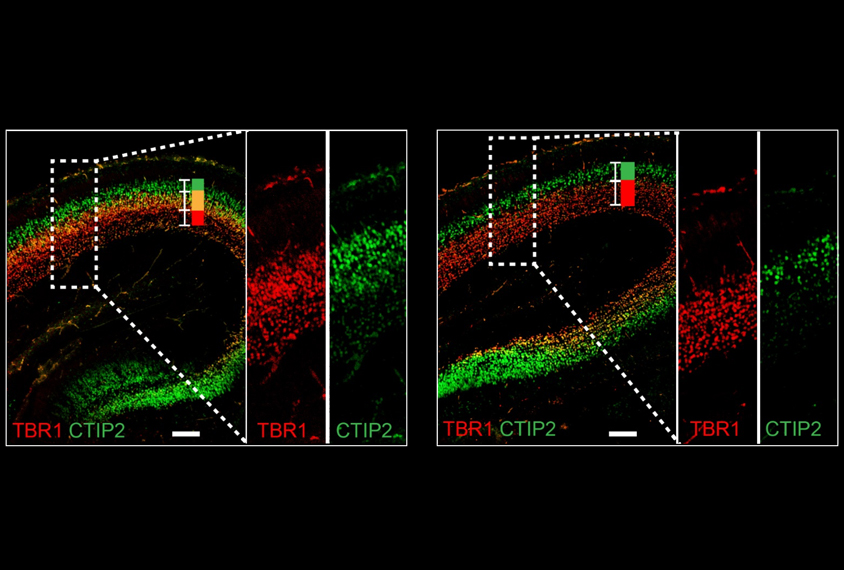 Speedy split: Cells destined for different cortical layers are still intermingled (orange) before birth in controls (left) but have already formed layers in mice exposed to infection in utero (right).

Exposure to infection in utero may speed up the expression of many genes linked to autism — and hasten changes in brain anatomy.

The results are in mice but hint at how infections during pregnancy may contribute to autism.

The new study is the first to look at gene expression across fetal development in mice exposed to infection, says Karol Cichewicz, a postdoctoral researcher in Alex Nord’s lab at the University of California, Davis. Cichewicz presented the unpublished findings yesterday at the 2019 Society for Neuroscience annual meeting in Chicago, Illinois.

Gene expression patterns in these pups already differ from those in controls six hours after infection, and the differences grow throughout gestation. But by birth, the gap narrows.

The researchers identified expression patterns for various groups of genes. At six hours post-infection, for instance, genes associated with immune activation, blood-vessel formation and metabolism are ramped up in the exposed mice.

At 17.5 days, genes that control the production of new brain cells are turned down compared with controls, and those that govern neurons’ maturation are turned up. This pattern mirrors the one seen in control mice at birth, suggesting that gene expression is accelerated in the infection-exposed mice.

Among the genes that show altered expression at 17.5 days, the researchers identified 82 with links to autism.

When the researchers injected pregnant mice with both the poly I:C and a chemical that tamps down inflammation, the pups’ gene expression patterns were more stable throughout development. This suggests that the changes in gene expression are tied to the infection exposure.

Before birth, the cerebral cortex is usually still forming into distinct layers, and many neurons are still being created at 17.5 days. But in mice exposed to infection, the layers are fully defined by 17.5 days and cell proliferation is winding down.

Because gene expression is still atypical at birth in mice exposed to infection, Cichewicz and his colleagues plan to extend their comparison to newborn pups. They also plan to analyze gene expression in single cells to pin down the cell types that show altered expression.