Infant hearing test might be sound predictor of autism 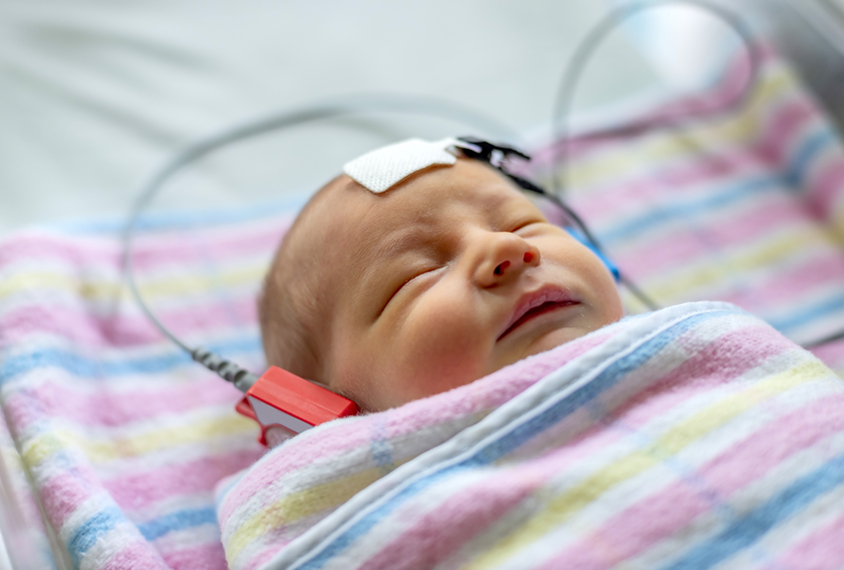 Auditory answers: Delays in infants’ auditory pathways may be an early indicator of autism.

Babies who are later diagnosed with autism have a slightly slower brain response to sound on a newborn hearing test than non-autistic babies do, according to a new study.

The ABR test is already used to screen nearly all babies born in a U.S. hospital for hearing impairments. Infants in a neonatal intensive care unit who were later diagnosed with autism showed delayed brain responses to sound on this test at around 10 days old, according to a 2012 study. And autistic children aged 2 to 6 years can also show ABR delays, a 2017 study suggests.

But those analyses both exposed participants to higher-intensity sounds than are typically used in routine screening. The new work investigated whether the results from conventional ABR screenings can foretell autism, too.

“There’s a brain test that’s done on every newborn to detect hearing impairment, and it’s already been shown it’s abnormal in children with autism,” Miron says. “Once we develop this marker further, it could help us modify those 4 million hearing tests that are done each year so they’ll also test for autism.”

The study supports the notion that hearing impairments are a cardinal sign of autism, says Randy Kulesza, professor and director of anatomy at Lake Erie College of Osteopathic Medicine in Erie, Pennsylvania, who was not involved in the study.

“It is important that we have more support for auditory problems in [autism], and this paper supports that these are detectable at birth,” he says. “The sooner kids are diagnosed with [autism], the sooner interventions and therapies can start.”

Miron and his colleagues analyzed universal hearing screening data for more than 130,000 babies born in Florida from 2009 to 2015. According to state education records, 321 of those children have autism.

The screening test involves piping a series of clicks through a headset into a sleeping newborn’s ears. Electrodes placed on the infant’s scalp detect the auditory brainstem response — a set of brain waves that arise in response to the sounds.

Miron and his colleagues relied on data from screening tests that used low-intensity clicks: 35 decibels, or about as loud as a whisper. They measured the timing of ‘V-negative,’ a dip in the waveform’s amplitude that occurs after its fifth, or ‘V-positive,’ wave. They also inspected the waveform’s phase, from its start to V-positive.

Autistic children show a slight delay in the appearance of V-negative as infants, the researchers found, but only for sounds piped into the right ear: The wave appeared 10.77 milliseconds, on average, after the clicks, compared with 10.51 milliseconds in non-autistic babies. And the brain-wave response is significantly prolonged compared with that of non-autistic babies, regardless of which ear the sounds are played in.

“There’s a novelty in the study, but because of some discrepancies and incongruities, it’s really not ready for prime time,” says Paul Kileny, professor of otolaryngology-head and neck surgery at the University of Michigan in Ann Arbor, who was not involved in the work. The differences between the two groups of children is small, and the discrepancy between the ears is unusual, he says — plus newborn hearing screening typically focuses on V-positive timing and does not measure or report the brain-wave response’s phase.

Future studies should use sound intensities at 80 to 85 decibels, or about as loud as a dishwasher, Kileny says. Previous studies show such tests can better detect differences related to autism.

Analyzing more ABR results might suggest other ways to refine the screening specifically for autism, such as by changing the decibel frequency, Miron says. More research could also reveal how this auditory mechanism in the brain relates to autism.

“We would really like the autism community to try to look more at this ABR test,” Miron says.

“From my perspective, the study begs several questions,” says lead investigator Isaac Kohane, professor of biomedical informatics at Harvard University — including whether the sluggish brain response to sound exists in only a subset of autistic children. Future studies should test that idea, he says, as well as whether the timing of the response changes as children age.