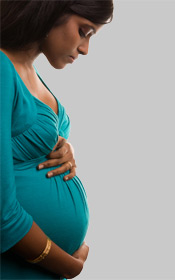 Particular pattern: Being exposed to a combination of autism-linked maternal antibodies is associated with repetitive behaviors in children.

Researchers have identified six fetal brain proteins that bind to maternal antibodies, which are thought to trigger changes to the fetal brain and raise the risk of autism.

About ten percent of mothers of children with autism carry certain antibodies that bind to fetal brain proteins and may boost their children’s brain size.

In the new study, the researchers found that, of 246 mothers of children with autism, 23 percent have two or more of these antibodies, compared with only 1 percent of 149 mothers of controls.

Previous research has shown that injecting these antibodies into pregnant mice or monkeys triggers abnormal behavior in the offspring.

The researchers had not previously revealed the fetal proteins’ names, identifying them instead by only their size.

Though the precise role the proteins play in autism risk is not yet clear, all are expressed in the brain. Van de Water, professor of internal medicine at the University of California, Davis, and her collaborators identified the proteins using brain tissue from monkeys.

Lactate dehydrogenase (LDH), a 37-kilodalton protein and one of the proteins most specific to the autism group, is involved in cell metabolism. Levels of the protein rise in response to viral infection and exposure to some toxins.

Two collapsin response mediator proteins (CRMP1 and CRMP2), also 73 kilodaltons each, are involved in growth cone collapse, which occurs when the long, finger-like projections that extend from neurons stop growing. The CRMP proteins have also been implicated in schizophrenia.

Y-box binding protein 1 (YBX1), a 39-kilodalton protein, is involved in regulating the transcription of RNA from DNA, as well as in cell proliferation and differentiation. It interacts with the Rett syndrome gene MeCP2 and the fragile X syndrome gene FMRP.

Cypin, a new addition to the list of candidate proteins, is involved in the branching of dendrites, which receive neural signals, in the hippocampus. It also helps regulate the density of dendritic spines, the small protrusions that form connections between neurons.

Children of mothers who have a combination of antibodies to LDH, STIP1 and CRMP1 are more likely to have repetitive behaviors than are controls.

A clinical test to detect these antibodies is being developed by Pediatric Bioscience, a California-based diagnostics company, and is expected to be available in about 18 months, says Van de Water. The researchers are also examining whether the presence of these antibodies in women can predict autism risk in their children.