How many tests does it take to diagnose autism? 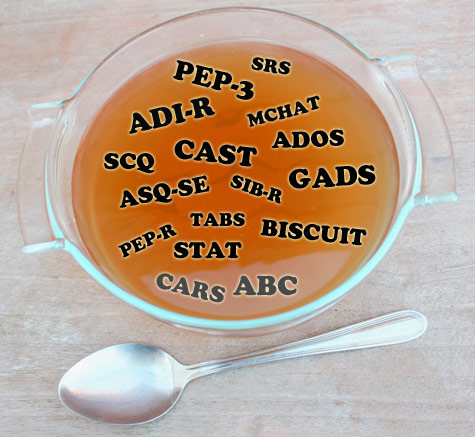 Alphabet soup: Researchers use a wide range of diagnostic and screening tools when enrolling participants in autism studies.

Sometimes it seems that the autism field has more acronyms than the federal government. This is particularly true when it comes to diagnostic and screening instruments for the disorder — ADOS, ADI-R, CASD, M-CHAT, CSBS, ATEC, ASSQ, SRS and SCQ, to name just a few.

Given the heterogeneity of autism and the fact that its symptoms overlap with those of other developmental disorders, researchers could be comparing dissimilar phenotypes when weighing research results.

“I don’t think we have a perfect diagnostic measure, but it would advance science if researchers would use a common battery,” says Amy Wetherby, director of the Center for Autism and Related Disabilities at Florida State University in Tallahassee. “Tests such as ADOS and ADI have helped because we know a lot about those tests and who they miss.”

The task of comparing results may become even thornier when new diagnostic criteria for autism spectrum disorders are phased in with the publication in 2013 of the fifth edition of the Diagnostic and Statistical Manual of Mental Disorders (DSM-5). Some of the proposed changes, such as the decision to merge Asperger syndrome into the broader autism spectrum, have created controversy.

“I think the DSM-5 definition is far clearer and will be easier for clinicians to use to make the diagnosis,” says Wetherby, who is a member of the Neurodevelopmental Disorders Work Group for the revision. “But prevalence rates may change and the accuracy of diagnostic tools may change as well.”

For decades autism has been defined by three core domains: social deficits, communication and language deficits, and restricted and repetitive behaviors. Individuals who show symptoms in two of the three categories would merit a diagnosis.

One of the proposed revisions in DSM-5 is to collapse social and communication deficits into a single category. This would place more emphasis on repetitive and restricted behavior, as an individual would need to manifest repetitive speech, rigid adherence to routine, fixated interests or sensory sensitivity to merit a diagnosis on the autism spectrum.

Of the two current gold standard screening measures, the ADI-R, a parent interview, reliably assesses all three original domains. ADOS, which is based on clinical interaction and observation, has traditionally been less helpful in identifying repetitive and restricted behaviors.

That’s because 30 to 40 minutes is not enough time to pick up many types of repetitive, ritualistic or restricted behaviors, says Matthew Goodwin, director of clinical research in the Media Lab at the Massachusetts Institute of Technology.

“[If] the gold standard does not reliably code for repetitive and restricted behavior, we’re in a bind,” Goodwin says. Goodwin is working on instruments that will more accurately assess and quantify restricted and repetitive behaviors.

Quantifying these behaviors is complicated by the fact that the category itself is so ill-defined, says Sylvie Goldman, developmental psychologist in neurology and pediatrics at the Albert Einstein College of Medicine in New York. “We will need a consensus regarding what counts as repetitive behavior or restricted interests, and also better standardized measures when DSM-5 goes into effect,” she says.

Some journals and reviewers are beginning to require that research studies confirm autism in research participants with ADOS, ADI-R or both. Use of these tests has grown tremendously over the past decade, says Catherine Lord, director of the University of Michigan Autism & Communication Disorders Center.

Lord, who developed both instruments, says that when administered by an expert clinician and combined with ADI-R, ADOS provides both sensitivity and specificity in diagnosing the disorder.

“It’s not that ADOS and ADI-R are perfect,” she says. “But when people use quicker screens they sometimes pick up people with other problems that may overlap with autism.”

The Communication and Symbolic Behavior Scales, a test intended for infants, toddlers and preschoolers, is one example of a test that picks up wide-ranging social and language difficulties.

But the expansive reach of the test was intentional, says Wetherby, who developed the test more than 30 years ago. “I created it for a broader audience than children with autism,” she says. “Social and communication difficulties are the most common feature of many developmental disabilities.”

The test is widely used today, most notably for screening 1-year-olds during well-baby visits at pediatricians’ offices in San Diego, California.

However, a 2009 report by the National Early Childhood Technical Assistance Center reported that the most popular screening tool for autism is The Ages and Stages Questionnaire: Social-Emotional (ASQ:SE), a 15-minute test for parents of children 3 months to 3 years of age. Second most popular is the Modified Checklist for Autism in Toddlers (M-CHAT), a revised version of the Checklist for Autism in Toddlers (CHAT), the first test to screen for early signs of the disorder.

The same report noted that only 61 percent of the 36 states that responded to the survey use ADOS to diagnose autism. A slightly higher proportion — 69 percent — uses the Childhood Autism Rating Scale (CARS).

ADI-R has been translated into 17 languages, and is used by most major research institutes and clinics in the U.S. and the U.K. A large-scale prevalence study in South Korea used the test and reported a prevalence of 2.65 percent in the country’s school-age population, more than double the reported rate in the U.S.

“In some ways, it is very helpful for groups internationally to use the same instruments,” says Tony Charman, professor of psychology and human development at the University of London. “However, this is not without difficulties in terms of applicability when translated across languages and, especially, cultures.”

Diana Robins, associate professor of psychology at Georgia State University, found this to be true when she adopted CHAT, a British test developed by Simon Baron-Cohen, for use in the U.S. Her version, M-CHAT, debuted in 1999, and quickly became a popular screening tool.

The sophisticated grammar of the original test and some of its cultural assumptions led to a few comic moments, she says. “In the beginning when they said we could use it, they didn’t want us to change anything,” she says. “We had to explain that American kids don’t make tea and we don’t let them play with bricks. We call them blocks here.”

The new version of M-CHAT, which will be out next year, further tweaks the language, clarifies developmental issues and reorders responses. Robins says. “One of the flaws in the original CHAT is that a ‘Yes’ response always indicates a healthy response and a ‘No’ answer indicates an atypical response. We wanted to intersperse revised score items from the very beginning.”

Researchers agree that no one has yet developed the perfect screening or diagnostic test for autism — and that this may be an impossible goal in any case.

A new tool developed by researchers at Harvard University’s Center for Biomedical Informatics may make it easier for researchers to compare the various tests. The Autism Phenotype Ontology aggregates data from more than 25 diagnostic tests for autism and groups them into categories. Researchers can search the database by instrument or by concept.

“The number of instruments is quite large and demands a significant commitment of time from both researchers and, even more importantly, from the families themselves,” says Alexa McCray, associate professor of medicine at Harvard Medical School. “If we could identify overlaps, then there is the possibility that the number of instruments and questions could be considerably reduced.”

Though the plethora of tests may pose problems for researchers, for clinicians the wealth of screening and testing instruments is helpful.

“Not all instruments are applicable to all children,” says Goldman. “Clinicians pick the instrument that fits the child.”