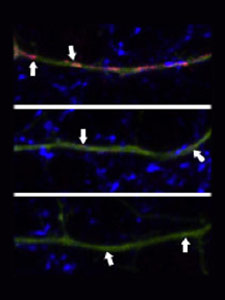 Lost linker: Neurons carrying either of two new mutations in neurexin-1 (red), an autism-linked protein, have less of the protein (above and middle) than controls do (top).

Researchers have identified four new mutations in the autism-linked gene neurexin-1 (NRXN1) in individuals who have autism and severe intellectual disability, they reported 3 April in Neurobiology of Disease1.

Neurexins are linker molecules that jut out on the signal-transmitting ends of synapses, the junctions between neurons. They form connections with neuroligins, which sit at the neurons’ signal-receiving ends. A 2003 study first identified mutations in neuroligins in two brothers with autism, implicating dysfunction at the synapse in the disorder.

Since then, several studies have linked both neuroligins and neurexins to autism, and identified duplications and deletions of regions of the NRXN1 gene in individuals with the disorder.

In the new study, researchers sequenced NRXN1 in 86 individuals who have autism and intellectual disability and 200 controls. They identified four individuals, each of whom has a different NRXN1 mutation that alters a single DNA base pair. None of these mutations is present in any of the controls.

Two of the mutations overlap with the start of the gene and would be expected to interfere with gene expression. But cells expressing these mutations produce a shortened version of NRXN1 protein that uses an alternative site at which to initiate expression, the study found. The other two mutations disrupt the protein in a region that extends through the cell membrane.

One mutation in each region — M1G at the start site and R375Q in the part that extends through the membrane — lowers the amount of NRXN1 present at the synapse by 30 percent and 60 percent respectively, compared with control protein.

For example, the M1G mutation is also present in two sisters who have depression, a nephew with attention deficit hyperactivity disorder and antisocial personality disorder, and an unaffected niece. The individual with the R375Q mutation inherited the mutation from her unaffected mother and shares it with her brother who also has autism.