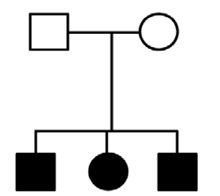 Family history: Three children who inherited a mutation in the MBD5 gene from their father have autism and intellectual disability.

Researchers have identified several harmful autism-linked mutations in a family of proteins that regulate the expression of various genes, they reported 10 October in Autism Research1.

The Rett syndrome gene MeCP2, which controls the expression of thousands of other genes, is the most well-known of this group. MeCP2 contains a methyl-CpG-binding domain (MBD) that binds methyl groups — chemical modifications that add a layer of regulation to DNA.

Researchers have found mutations and deletions that encompass MBD5, another member of the MBD protein family, in many people with autism.

In the new study, researchers sequenced MBD genes (MBD5, MBD6, SETDB1, SETDB2 and MeCP2) in 287 people with autism and as many controls.

They identified 186 variations in these genes, of which 96 were not previously identified, and 53 are found only in individuals with autism. Of the 53, 17 are likely to change the protein structure.

Four of the variants — one each in MBD5, MBD6, MeCP2 and SETDB1— were inherited along with autism in the family of the affected individual. For two of these, MBD6 and SETBD1, this is the first reported link to autism.

One mutation in MBD5 that changes a tyrosine to a cysteine is present in all three children of one family, all of whom have autism. The two boys and one girl inherited the variant from their father, who has Charcot-Marie-Tooth disease.

A mouse version of MBD5 with this mutation boosts levels of a marker protein by 72 percent, suggesting that the variant enhances gene expression.

The researchers also identified a duplication of MeCP2 in a boy with autism, who inherited it from his mother. His brother also has the duplication and does not have autism, but has developmental delay, intellectual disability and cannot speak.