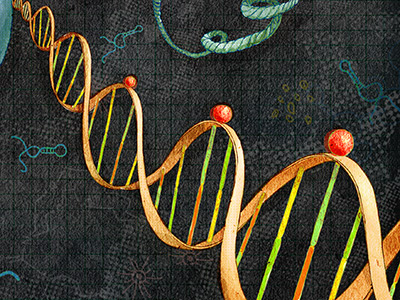 Julia Yellow Off switch: When tagged with a phosphate, MeCP2 blocks the formation of microRNAs, which typically inhibit gene expression.

Having one too many copies of MeCP2, the Rett syndrome gene, may block the growth of neuronal branches by interfering with the production of small pieces of RNA, according to a study published 10 March in Developmental Cell1.

People with Rett syndrome, a disorder characterized by a sudden loss of language and motor ability, carry a harmful mutation in MeCP2. The inverse, an excess of the gene, also leads to symptoms that resemble those of autism.

MeCP2 is a master regulator of gene expression, controlling the expression of thousands of genes. Studies suggest that it works by modifying how DNA is packaged.

In the new study, the researchers showed that MeCP2 may also block the processing of small pieces of RNA, called microRNAs. Neurons from mice lacking MeCP2 produce too many microRNAs, whereas mice with an extra copy of MeCP2 have too few.

MeCP2 interferes with the function of DGCR8 — a component of a large complex that is crucial for microRNA synthesis, the researchers found. DGCR8 is located in the 22q11.2 chromosomal region, which has been linked to both schizophrenia and autism.

About 15 percent of people with Rett syndrome have mutations in MeCP2 that would prevent its interaction with DGCR8 altogether, leading to permanently elevated microRNA synthesis. Conversely, an extra copy of MeCP2 would block microRNA production by binding to too many copies of DGCR8.

The study found that MeCP2 controls levels of a microRNA called miRNA-134, which plays an important role in regulating neural development. Adding miRNA-134 to mouse neurons with excess MeCP2 restores the growth of their branches, suggesting that this microRNA in particular is involved in this defect.