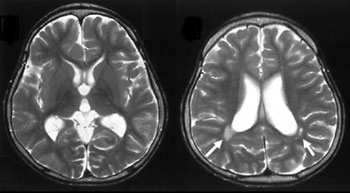 Head scan: A duplication of the Rett syndrome gene may lead to deficits in connectivity between brain regions.

Individuals with an extra copy of MeCP2, the gene mutated in Rett syndrome, have severe developmental delay accompanied by seizures, respiratory infections, poor motor skills and features of autism, according to two new case studies1,2.

MeCP2 duplication is extremely rare. In mice, as in people, it leads to an autism-like syndrome that includes seizures, anxiety and motor and social deficits3,4.

MeCP2 is located on the X chromosome, so mutations in one copy are almost always fatal in boys. In girls, one copy of the X chromosome is randomly inactivated in cells throughout the body. As a result, roughly half their cells carry the mutant.

The first new study, published 6 August in Brain and Development, describes three males and a female with a duplication in a chromosomal region that encompasses MeCP23. The researchers identified these individuals from 700 people referred for genetic testing.

All four have severe developmental delay, involuntary muscle movements, recurrent respiratory infections, unusual facial features and have shown a regression of skills throughout their lifetimes. They also have less white matter, which contains neuronal projections, than controls do. The three males have seizures and cannot speak.

In the second study, published 21 August in BMC Medical Genetics, researchers describe two brothers with MeCP2 duplications, the first such cases identified among the Han Chinese, the majority ethnic group in China.

Both boys have severe intellectual disability, lack of speech, mild motor deficits, unusual facial features and are diagnosed with autism. They do not have epilepsy or recurrent respiratory infections.