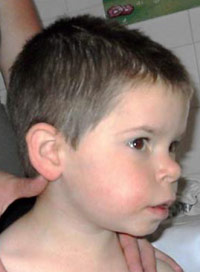 Genetic effects: A boy who has alterations in two autism-linked genes has abnormal facial features.

A boy with autism lacks one copy of SHANK2 and has a duplication of CHRNA7, two genes that have been linked together to autism risk, according to a case study published 25 January in Clinical Genetics1.

The results bolster the theory that autism is the result of multiple hits to the same pathway, in this case, signaling at the junctions between neurons.

SHANK2 is a member of a family of proteins that sit at the receiving ends of neuronal junctions, or synapses, and strengthen these connections. The family also includes SHANK3, which is one of the strongest candidate genes for autism.

Several studies have found that individuals with autism have more mutations or deletions that encompass SHANK2 than controls do.

In particular, a study last year found that three individuals who have autism and a SHANK2 deletion all also have a duplication or deletion that encompasses another synaptic protein. In two cases, this is an extra copy of CHRNA7, a component of an ion channel that regulates signaling at synapses.

The new study describes a boy who is missing one copy of SHANK2 and has a duplication that encompasses CHRNA7. The duplication also includes GPRIN2, a protein that regulates the growth of neuronal projections.

The boy has severe intellectual disability, language impairment and autism. He also has unusual facial features and motor deficits.