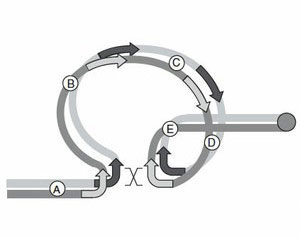 European Journal of Human Genetics Gene splicing: A deletion within an autism-associated chromosomal region may predispose the DNA to recombination, resulting in a neighboring deletion.

Gene splicing: A deletion in an autism-linked chromosomal region may predispose the DNA to recombination, potentially leading to a neighboring deletion.

A pair of twins who have autism carry a non-inherited duplication that overlaps with 16p11.2, a chromosomal region that has been associated with autism. Their brother, who also has autism, has a nearby deletion within 16p11.2, according to a study published 11 January in the European Journal of Human Genetics1.

The results highlight the genetic diversity of autism and that too many or too few gene copies can both lead to neurological disorders.

Duplications and deletions of chromosomal regions spanning several genes, also called copy number variations (CNVs), have been associated with autism and other psychiatric disorders. One of these, the deletion of a 600-kilobase region on chromosome 16, called 16p11.2, is present in about one percent of people with autism.

About 30 percent of people with the 16p11.2 deletion have autism, according to one study. The deletion is also associated with intellectual disability and obesity. Duplications of the same region have been linked to schizophrenia.

In the new study, researchers identified chromosomal alterations that overlap with the 16p11.2 region in a pair of identical twins and their older brother, all of whom have autism.

The eldest boy carries a small deletion of a part of 16p11.2 that has been linked to obesity. He was diagnosed with autism at age 4, is obese and has unusual facial features, or dysmorphology.

He inherited the deletion from his now-deceased father, who does not have a psychiatric evaluation but is described by his wife as having been introverted and having had few friends.

The twins were diagnosed with autism at 3 years of age and have similar symptoms, including intellectual disability and dysmorphology.

The sites at which the twins’ DNA is rearranged suggest that the father’s 16p11.2 deletion may predispose the 16p.11.2p12.2 region to duplication during meiosis, a type of cell division in which chromosomes separate. Further research is needed to confirm this, but it suggests a genetic connection between the father’s and sons’ variants, the researchers say.