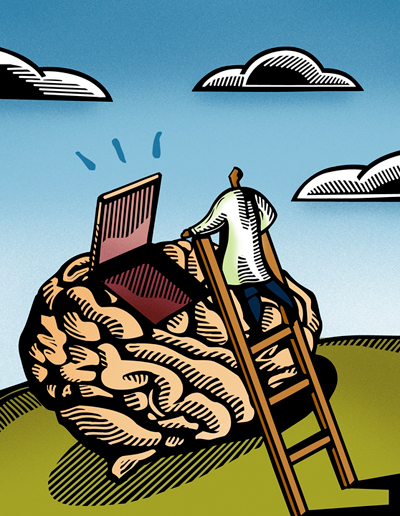 Bench vs. bedside: Clinicians and researchers may need different ways to ask questions about psychiatric disorders.

The 18 May release of the DSM-5, the 5th edition of the Diagnostic and Statistical Manual of Mental Disorders, was upstaged by a controversial announcement threeweeks earlier.

In a blog post on 29 April, National Institute of Mental Health (NIMH) director Thomas Insel announced that institute would move away from funding research proposals that hew closely to DSM-5 diagnoses such as autism spectrum disorder and schizophrenia.

Insel proposed that researchers instead use Research Domain Criteria (RDoC), an NIMH creation that outlines biological traits and variables that scientists can use to study psychiatric disorders.

The post, which went live just before the International Meeting for Autism Research in San Sebastián, Spain, instantly became the talk of the autism community.

Insel’s words struck many readers as an attack on the already-controversial document.

“I think it was an unfortunate choice of words to say the DSM lacks validity,” says Sarah Spence, pediatric neurologist at Boston Children’s Hospital, who was previously a staff scientist at the NIMH. Some people feared the post would put insurance coverage for mental disorders in jeopardy, Spence notes. “That would be a catastrophe.”

In the aftermath of the reaction to his post, Insel clarified that RDoC is a research tool, not intended for clinical use. On 13 May, he issued a joint statement with the president-elect of the American Psychiatric Association, which publishes the DSM, emphasizing that the two projects are complementary.

“We’re trying to create the framework of science that could inform the next DSM,” Insel told SFARI.org.

Many autism researchers say Insel’s proposal reflects the way they already approach the disorder — by, for example, looking at subgroups of people with autism, or probing genes that play a role in multiple neurodevelopmental conditions.

“It will make me write more honest grant proposals,” says David Ledbetter, chief scientific officer at Geisinger Health System in Danville, Pennsylvania. Ledbetter is involved in studies of a chromosomal region, 16p11.2, that is associated with autism, intellectual disability and other developmental delays.

Ledbetter’s work suggests that neither genes nor symptoms adhere to existing labels of neurodevelopmental disorders. “To have to recruit subjects and conduct research according to fixed categories is limiting,” he says. “We’re liberated from the DSM.”

Insel says he hopes not to overthrow the DSM but to improve it.

“To be really concrete about this, we’re trying to get biomarkers,” he says. The biomarkers might identify subsets of people currently labeled as having autism and become the basis for a new diagnostic scheme that relies on the biology underlying psychiatric disorders rather than on their overt symptoms.

Insel says he was motivated to write his post after hearing from researchers who had submitted grant proposals based on RDoC criteria and had them rejected.

He says outside experts who review grant applications may not have known about RDoC, even though it was launched in 2009. “Finally people have heard about RDoC.”

For now, RDoC encourages scientists to use genetics, brain imaging and other research methods to investigate five social, cognitive and other ‘domains’ of function. Within these domains are traits such as fear and anxiety, working memory, language and sleep-wake cycles, for example.

Some experts say this list leaves out important aspects of autism.

“There isn’t anything in there about change over time and the fact that people learn things,” says Catherine Lord, director of the Center for Autism and the Developing Brain in New York City and a member of the DSM-5’s neurodevelopmental disorders working group. “If it’s going to be useful to real people with real problems, we have to have some kind of developmental context.”

Lord says she and her colleagues have developed ways to analyze scores from the Autism Diagnostic Observation Schedule, the widely used diagnostic test that Lord developed. “We’ve been trying very hard to get dimensional data from our categorical measures for the last few years,” she says.

In practice, however, it is difficult to measure only one dimension at a time in autism: Some tests reflect both cognition and social behavior, for example. “Very seldom do you have a pure dimension,” Lord says.

It may also be premature to expect biology to replace symptom-based diagnostic categories, cautions Spence.

“We have to be a little bit careful about saying that the biology is going to tell us everything,” Spence says. For example, she notes, people with fragile X syndrome all have the same genetic abnormality, but widely varying clinical characteristics.

Others are more optimistic, and say the DSM-5 and RDoC will both serve valuable roles.

“I think [the DSM and RDoC] have a lot to offer each other, as opposed to thinking we’re going to abandon one for the other,” says Elliott Sherr, associate professor of neurology at the University of California, San Francisco School of Medicine.

Sherr’s own research already reflects some of the principles outlined in RDoC. He studies people who carry deletions or duplications of 16p11.2 and those with callosal agenesis, a congenital defect in which the bundles of nerve fibers that connect the two hemispheres of the brain do not form.

Some individuals who have one of these conditions meet the criteria for autism. “You can still be studying autism even if everybody [in the study] doesn’t have it,” Sherr says.

Less strict adherence to DSM categories might help in the clinic as well, he adds. For example, people with callosal agenesis often struggle with social interactions, and might benefit from autism interventions even if they don’t meet diagnostic criteria for the disorder.

Before that can happen, however, RDoC will need to provide a framework that can be used in the clinic, Sherr says. “You just have to make sure that the patients aren’t lost in the shuffle.”