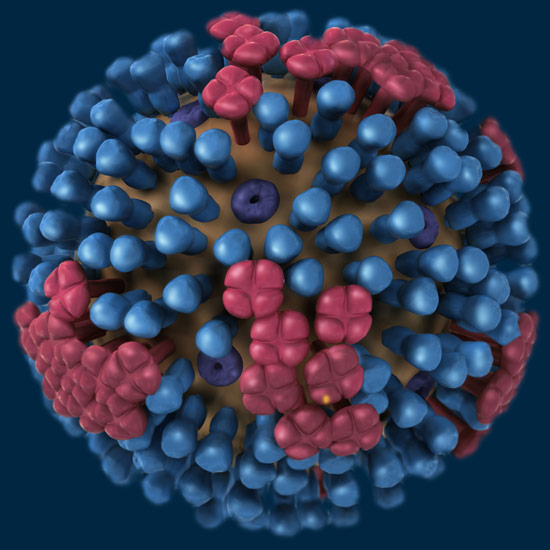 Double jeopardy: Serious flu infections early in pregnancy are associated with a higher incidence of autism in babies.

Babies born to rhesus monkeys infected with the flu virus during pregnancy have significantly smaller brains than normal, and other brain abnormalities seen in schizophrenia, researchers have found.

“[This] is another major step forward in providing validation of the maternal flu associations with schizophrenia,” says Alan Brown, associate professor of clinical psychiatry and clinical epidemiology at Columbia University, who was not involved with the research.

An estimated 11 percent of pregnant women are infected with the flu at some point during pregnancy2. Researchers say the severity of infection is likely to determine the effects on the developing fetus. A population-level study published in April found that infections serious enough to require pregnant women to be hospitalized early in pregnancy are associated with a higher incidence of autism spectrum disorders in their babies.

“Some can get the flu with few ill effects, but others who may be more prone to larger inflammatory responses and high fevers would be at greater risk,” says Christopher Coe, professor of psychology at the University of Wisconsin, who led the monkey study. “Timing of the infection during pregnancy is also likely to be an important issue.”

In a classic 2004 case study, Brown and his colleagues scanned medical records of more than 12,000 women who were pregnant between 1959 and 1966 and found that 71 of their children later developed schizophrenia. The researchers analyzed banked blood samples from the mothers of 64 of those individuals as well as of 125 controls3.

By detecting the flu antibody’s appearance in the samples, the researchers were able to predict exactly when the women were infected with the virus. Brown found that children of women exposed to flu in their first trimester have a seven-fold higher risk of developing schizophrenia compared with controls. Children of those exposed to flu in the first half of pregnancy show a three-fold higher risk.

Other studies have shown a spike in the prevalence of schizophrenia in children born following severe flu pandemics. The effect was particularly prominent after the 1954 and 1957 flu epidemics4.

In the new study, researchers exposed 12 pregnant rhesus monkeys to an influenza virus in the early part of their third trimester. They chose the third trimester because it is a period of rapid brain development, when neurons are migrating to the correct location in the brain and forming connections with other nerve cells, says Coe.

In response to the virus, the monkeys developed a mild flu. Although monkeys do not typically develop a fever or symptoms common to human flu, the team took nose swabs from the moneys to verify that they were infected. They also looked for flu antibodies in the newborn monkeys.

When the offspring reached 1 year of age — the equivalent of late childhood in humans — the researchers used magnetic resonance imaging (MRI) to detect any changes in the brain.

Monkeys born to flu-infected mothers have brains that are 4.4 percent smaller on average than those of controls. One section of the brain, the parietal lobe — where language develops and where senses such as sight, sound and touch are coordinated — has significantly less gray matter, which is made up of neurons, and white matter, the insulated nerve fibers that transmit electrical impulses between neurons.

The researchers noted significantly less gray matter throughout the higher brain, which orchestrates thought and behavior.

They also found that lateral ventricles — horseshoe-shaped chambers that hold cerebrospinal fluid — are enlarged in some of the monkeys born to infected mothers. This is a common feature in individuals with schizophrenia, bipolar disorder and Alzheimer’s disease.

The greater the immune response in the mother, the larger the lateral ventricles in the offspring, the researchers found. “It may indeed be the amount of immune activation as a result of the infection that may be the most critical factor that’s influencing these [brain size] changes and other abnormalities that are apparent in the offspring,” says Brown.

Another study, published 23 April in the Journal of Autism and Developmental Disorders, also supports the notion that the severity of infection affects the fetus. Danish researchers studied records of prenatal infection and diagnoses of autism spectrum disorders in children born in Denmark between 1980 and 2005. Women who had a viral infection in the first trimester or a bacterial infection in the second trimester that was serious enough to require hospitalization were more likely to give birth to children with autism5, the researchers found.

Other types of viral infection may also cause brain abnormalities. Researchers reported in May that adults with schizophrenia who have been exposed to the cold sore virus, herpes simplex virus 1, have lower brain volume in the anterior cingulate, which is associated with cognitive processing, and the cerebellum, which controls movement6.

Most data on the effects of prenatal exposure to flu come from population-level studies, which only provide indirect evidence. And experts point out that the results of animal studies may not be easily translatable to humans.

Human and monkey babies are born at different stages of brain development, Coe notes. “Fortuitously, there is lots of important brain development in humans that happens even after birth,” he says. “So there is a greater likelihood of postnatal recovery in humans and in the rearing environment.”

Some researchers add that more research is needed on the timing of infection. There is no evidence in rodents or humans of infection during the third trimester causing an increase in the risk for schizophrenia or other neurodevelopmental disorders, so the results should be interpreted with caution, notes Paul Patterson, professor of biological sciences at California Institute of Technology.

Patterson and his colleagues have shown that flu infection early in pregnancy in mice leads to autism- and schizophrenia-like abnormalities in their offspring7. Coe’s team is testing the effects of infection in the first and second trimesters of pregnancy.

Researchers are also split on whether it is the infection itself or the resulting immune response that causes developmental abnormalities in the fetus. Studies show that inflammatory proteins called cytokines, produced in response to a high fever, can cross the placenta and wreak havoc on brain cells in the developing fetus. Others say maternal antibodies evoked by the flu or the flu vaccine might cross the placenta, triggering an autoimmune response against the baby’s brain cells8.

There is evidence of both cytokines and antibodies having effects in animals, says Patterson, and both [mechanisms] could be at play in humans.

Coe says there is not enough evidence that antibodies to a vaccine could be detrimental to the fetus, but more animal studies would clarify the issue. He supports the U.S. Centers for Disease Control and Prevention recommendation that pregnant women be vaccinated for seasonal flu.

“It’s an unanswered question because we don’t know enough about vaccination during pregnancy,” says Brown, who is studying the effects of prenatal flu on risk for bipolar disorder and autism.

Although influenza infection presents some risk of neurodevelopmental disorders, Brown says, “if the mother took care of herself during pregnancy and otherwise had a healthy pregnancy, the overall risk is still relatively low.”