Cell explosion: Zebrafish embryos with low levels of KCTD13 protein (left) show a surge of new brain cells compared with controls (middle) or those with too much KCTD13 (right).

By creating genetically engineered fish, two independent groups have identified genes in an autism hotspot on chromosome 16 that influence head size and brain development. One of the studies appears today in Nature1.

Using zebrafish allows for an unbiased screen of individual genes, says Nicholas Katsanis, professor of cell biology at Duke University in Durham, North Carolina, and lead investigator of the Nature study. “We tested all of them with exactly same protocol, with no prior expectation of what we were going to find,” he says.

This seems to mirror what happens in people. Individuals lacking one copy of 16p often have abnormally large heads, dubbed macrocephaly, whereas those with an extra copy tend to have abnormally small heads, or microcephaly.

Another report, published 1 May in Disease Models and Mechanisms2, finds that the vast majority of genes in the 16p region affect brain development. In most cases, gene expression must be lowered by at least 75 percent to see an effect. But for two of the genes — ALDOA and KIF22 — cutting the expression in half, which mirrors the loss of a single copy in people, leads to abnormal brain and body shapes.

Studying zebrafish “looks like a good way of prioritizing the genes responsible for a specific part of the syndrome,” especially for clear-cut anatomical features, notes Wendy Chung, assistant professor of pediatrics and medicine at Columbia University in New York, who was not involved in either study.

“The limitation is, you can’t really see autism in a zebrafish,” says Chung, principal investigator of the Simons Variation in Individuals Project, funded by SFARI.org’s parent organization, which aims to study people with deletions or duplications of 16p. One obvious next experiment, she says, would be to search for KCTD13 mutations in people who have autism and big heads.

At a grant review meeting in Paris last March, Katsanis happened to sit next to Jacques Beckmann, a medical geneticist at the University of Lausanne in Switzerland. Beckmann told Katsanis about his 2010 results, showing that individuals who are missing a copy of 16p tend to be overweight and have large heads, whereas those with a duplication of the region show the opposite features. 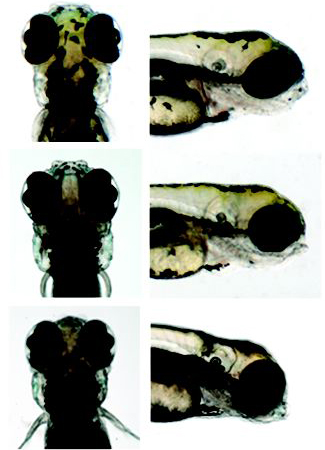 Size matters: Zebrafish embryos with low levels of KCTD13 protein (top) have bigger heads than controls (middle), whereas those with too much KCTD13 (bottom) have abnormally small heads.

Size matters: Zebrafish embryos with low levels of KCTD13 protein (top) have bigger heads than controls (middle), whereas those with too much KCTD13 (bottom) have abnormally small heads.

Katsanis says he immediately thought of zebrafish. Since 2008, he and his colleagues have created a library of more than 200 types of fish carrying disease-linked genetic mutations. “It was like a light bulb,” Katsanis recalls. “I thought, ‘Well, I can’t measure obesity and I can’t do behavior, but I can measure head size.’”

Within two months, Katsanis and his team were manipulating 16p genes in the fish. To mimic the effect of a genetic duplication, they injected human RNA of each of the 29 genes in the 16p region into zebrafish embryos and measured their heads four days later. (It’s not possible to measure head size much later than that, Katsanis says, because RNA degrades quickly and any effect it may have will be lost.)

To recapitulate a 16p deletion, the researchers exposed the fish embryos to morpholinos, synthetic molecules that curb the expression of specific genes. In this experiment, the morpholinos reduced expression of each target gene by about 70 percent.

Only 1 of the 29 genes influenced head size: KCTD13. “Essentially nothing” is known about its function, according to Katsanis. But in zebrafish and mouse cell lines, the researchers showed that knocking down the gene leads to an overgrowth of new neurons in the developing brain.

Another piece of evidence came last July, when Katsanis presented preliminary data from this work at a conference in Newport, Rhode Island. He learned that James Gusella, professor of neurogenetics at Harvard Medical School, had found an individual with autism who carries an unusual 16p rearrangement that includes a mutation in KCTD13. What’s more, a study published last year reported a family in which six members, four of whom have autism, are missing a small, five-gene section of 16p. One of those genes is KCTD13.

“This study does not exclude the possibility that there are other genes in the human region of 16p11.2 that also contribute to head size,” Katsanis says. “But it suggests that this one gene is the major driver.”

Because genetically engineered zebrafish are quick and inexpensive to make, at least compared with transgenic mice, they may also be useful for screening hundreds of drugs as potential therapies and for insight on relevant biological pathways.

Others say that approach may be premature for KCTD13. “There’s a long way from a chemical screen to a therapeutic, but especially when it involves the proliferation of brain cells,” notes Hazel Sive, a member of the Whitehead Institute for Biomedical Research in Cambridge, Massachusetts.

Sive led the second new zebrafish study on 16p genes. Her team found that when ALDOA gene expression is cut by half, the fish show an abnormal response to touch and develop a narrow forebrain. When KIF22 levels are reduced by half, the fish develop smaller brains and a bent tail.

ALDOA encodes an enzyme involved in metabolism. Two case studies have linked the gene to mental retardation3 and language delay4, and postmortem studies have found high levels of expression in the brains of people with schizophrenia and depression compared with controls5.

ALDOA interacts with SHANK3, a protein needed for neuronal connections that has been strongly linked to autism. KIF22 is important for chromosome alignment, but little is known about its role in the brain.

Perhaps most intriguingly, Sive says, 20 of 22 genes she tested in the 16p region affect brain development. “We think this is a very active set of genes, much more active than your usual handful of genes,” she says.

Taken together, the studies suggest that the interaction of several genes drives the diverse symptoms of individuals carrying 16p mutations. Zeroing in on specific genes might help tease apart those relationships, Sive says. “We need all the hints we can get if we’re going to understand the genetics of autism.”