People with autism display atypical patterns of brain activity while viewing faces: thatʼs the conclusion from a study that used functional magnetic resonance imaging (fMRI) to assess what happens in the brain when people see faces1.

Face perception is the basis of social cognition, says the studyʼs first author, Natalia Kleinhans, assistant professor of radiology at the University of Washington. “Itʼs a fundamental component of social interaction.”

The brainʼs response to faces involves the concerted activity of a ‘social brainʼ network, made up of interconnected brain regions responsible for detecting and identifying faces, interpreting eye gaze and deciphering emotional cues. Kleinhans and colleagues found that, in people with autism, this network does not work together as efficiently as it should.

These results add to the theory of underconnectivity in autism, which describes weakened connections in brain regions involved in language, attention and emotion perception in those with autism.

The study used fMRI to study the fusiform face area (FFA), a region that responds preferentially to faces, and other areas of the social brain network.

Although the pattern of activity across different brain regions is altered, the researchers found that activation of the FFA itself in those with autism resembles that seen in controls.

Thatʼs probably because the study design ensured that participants were looking at faces, says Nouchine Hadjikhani, associate professor of radiology at Harvard Medical School and at the Swiss Federal Institute of Technology in Lausanne, who also conducts research into face processing2.

“The problem with previous studies that had been done on face perception in autism and that did not find activation in the FFA is that they were not controlling for looking at faces,” she says. “Autistic people do not like to look at faces, they avoid faces, they avoid eye areas a lot.”

When two areas are activated at the same time, it suggests that they are functionally connected. Although the temporal resolution of fMRI is too low to deduce which area is activated first, activation of different regions can show how information is integrated across the network. 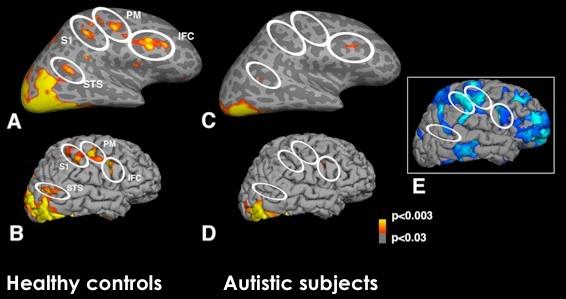 
Mirror mirror: Face perception activates mirror neuron areas in healthy controls, but not in those with autism.

When the researchers monitored other areas in the social brain network, they found that in controls, exposure to faces activates a constellation of areas in addition to the FFA, including the middle temporal gyrus, the posterior cingulate, which is associated with autobiographical and episodic memory, and subcortical regions, including the thalamus, the superior colliculus, and the amygdala, which mediates perception of emotions.

The results suggest that when a person with autism sees a face, it doesnʼt evoke as many memories or emotions as it does in controls, says Kleinhans. In support of this finding, those with the most reduced FFA-amygdala connectivity are also the most socially impaired.

Although scientists tend to overlook any role for subcortical structures in complex tasks, the results of the study suggest that those regions are important for face processing. In those with autism, there appears to be no significant connectivity between the FFA and the thalamus and superior colliculus, the study found.

There is some evidence that, along with the amygdala, these regions belong to a subcortical face detection pathway that may underlie peopleʼs preference to look at faces3.

Inputs from this subcortical circuit might help guide cortical areas such as the FFA to specialize in faces early in brain development, says Atsushi Senju, a research fellow in psychology at Birkbeck College in London.

Problems with this pathway might contribute to atypical face processing in autism, he says.

Hadjikhani is finding similar abnormalities in her own studies. “Where the system goes wrong in autism might be at this very basic level of subcortical processing,” she says.

“It shows that one should stop trying to look at one place and find one difference in autism,” she says. “I think that any of these areas, or the connections between these areas [can be having a problem].”