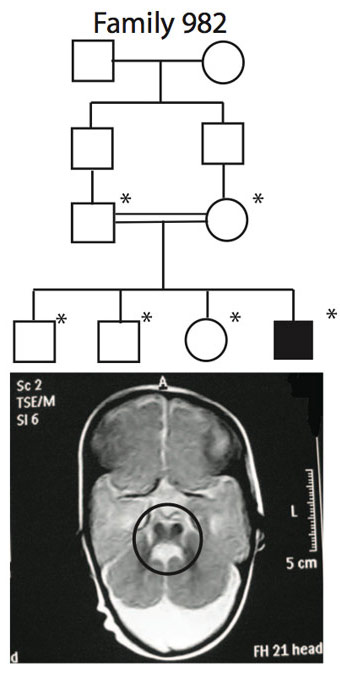 Family affair: Sequencing the exome of a member of a consanguineous family (top) helped researchers pinpoint the mutation responsible for a case of Joubert syndrome (bottom).

Family affair: Sequencing the exome of a member of a consanguineous family (top) helped researchers pinpoint the mutation responsible for a case of Joubert syndrome (bottom).

By sequencing the protein-coding region of the genome, or exome, of a single affected family member, researchers were able to diagnose 20 percent of people in 85 consanguineous families with unknown neurodevelopmental disorders, according to research published 13 June in Science Translational Medicine1.

Unpublished data from the same project suggest that the researchers would be able to diagnose more than 50 percent of people in this group if they also sequence the exome of another affected family member.

The findings highlight the power of exome sequencing in both diagnosis of unknown diseases and in identifying new disease genes, and offer up a slew of new candidate genes for neurodevelopmental disorders.

“We are up to our elbows in what we think are previously unknown causes of neurodevelopmental diseases using this strategy,” says lead investigator Joseph Gleeson, professor of neuroscience at the University of California, San Diego.

The results also suggest that a significant number of children with these disorders may be misdiagnosed: Exome sequencing changed the diagnosis in about ten percent of participants in the study.

“Papers like this really do show you the power of technology,” says James Lupski, professor of molecular and human genetics at Baylor College of Medicine in Houston, Texas, who was not involved in the study. He says the results are similar to those from clinical sequencing efforts at Baylor.

Thanks to the plummeting costs, sequencing an exome is now on par with the cost of traditional genetic tests, which analyze one or a panel of genes. More physicians are beginning to use it in clinical practice — Baylor’s Medical Genetics Laboratory offers exome sequencing for a fee — but interpreting the results is still a challenge.

It’s unclear how well the approach can be applied to autism, because some people with the disorder have mild symptoms and a less well-defined family history than those in this study. So far, exome sequencing of people with autism has found that hundreds of genes are likely to be involved in the disorder.

In the new study, Gleeson and his collaborators sequenced the exomes of 85 people with a variety of neurodevelopmental disorders, selecting one affected member of each family. All families in the study include parents who are related on some level, known as consanguinity, and two or more children in the family with the same condition.

“We know from years of genetic research that these families are powerful,” in terms of finding mutations responsible for recessive diseases, says Gleeson.

Because the goal of the study was to find new causes of neurodevelopmental disorders, the researchers excluded people who had mutations in known disease genes.

They found that each exome contains between two and ten variants of unknown significance, making it difficult in most cases to pinpoint the mutation causing the disorder.

But in 22 families, about 20 percent of the group, researchers found a single mutation in a gene not previously linked to neurodevelopmental disorders that stood out as a possible cause of disease. The candidates included mutations that make a shortened or otherwise altered version of the protein and are therefore likely to affect protein function.

To confirm that a candidate mutation causes the disease, the researchers checked that it is found only in affected family members. So far, they have confirmed this for 2 of the 22 genes.

Two genes proved particularly compelling. One of these is GFM2, identified in a family with smaller-than-normal brain size and diabetes. The other is EXOC8, found in a family with Joubert syndrome, which is caused by a rare malformation in the cerebellum, the part of the brain that controls balance.

The researchers are also trying to better understand the function of the candidate genes by studying the mutations in animal models.

Ten people in the group turned out to have mutations in genes that previously had been linked to neurodevelopmental disorders, but not the disorder with which the individual had been diagnosed.

“In roughly eight percent of patients, exome sequencing can correct a diagnosis and in some cases lead to alterations in [disease] management,” says Gleeson.

In most of those cases, the people have unusual symptoms that camouflaged the real diagnosis.

“I think this is a major area where exome sequencing will play a role,” says Gleeson. “In neurodevelopmental disorders, we don’t have a good way to phenotype patients, and the genes that cause disease often cause a spectrum of disorders.”

Indeed, as clinical exome sequencing becomes more common, researchers say, they may discover that the symptoms of certain genetic disorders are much broader than previously thought.

Since submitting the paper for publication, researchers have sequenced ten times as many exomes and identified many more candidate genes.

The researchers have also sequenced the exome of an unaffected family member from each of the original families. By ruling out mutations not shared by two affected family members, for example, they can exclude 75 percent of variants. “Now we can find the cause in more than half of the 86 children,” says Gleeson.

In children who do not have a second affected family member, sequencing an unaffected parent can be helpful, he says. (They can rule out the mutations the parent and child have in common.)

Given the rapid drop in the cost of sequencing over the past few years, there are also much more exome data available for researchers to analyze than there were when they first started the project. “There’s a tidal wave of results coming out, and each new study helps interpret the previous results,” says Gleeson. “We can exclude more variants known to be benign.”

Applying the approach to autism may be a challenge, however. In this study, the affected children had obvious phenotypes that made it easy to distinguish them from unaffected family members. With autism, “frequently the healthy sibling has some mild symptoms, so it’s very hard to be certain they are truly unaffected,” says Gleeson.

Also, existing databases are full of errors, erroneously linking genetic variations to disease. “We saw that with my own genome,” says Lupski, who sequenced his genome in search of [the cause of Charcot-Marie-Tooth] disease, a disorder that affects his sensory and motor nerves. “If you believe [the database], I should be in a persistent vegetative state.”

Many papers report new genes identified by exome sequencing, Lupski notes. “But I like the ones dealing with clinical sample sets so we can get a feel for clinical utility in the real world,” he says. “That will only get better and better as we figure out what these genes do.”