Excess brain fluid in infants may be early sign of autism 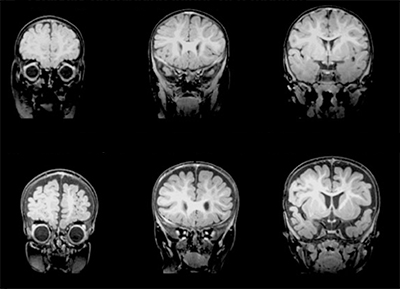 Head size: Some children with autism (bottom) have both enlarged heads and an excess of brain fluid.

Infants who go on to develop autism have excess fluid between the top of the brain and the skull, according to a study published 9 July in Brain1. This accumulation persists from about 6 months to 2 years of age, and may serve as an early indicator of autism, the researchers say.

Autism is typically diagnosed around 3 years of age, but behavioral interventions are more effective when begun as early as possible, notes lead investigator David Amaral, professor of neurobiology at the University of California, Davis MIND institute.

“This could be very helpful to families to make the decision about whether they want to invest the time and financial resources to get their child into intensive behavioral therapy,” he says.

Many studies have reported that children with autism have abnormally large heads or enlarged brains. The new study is the first to document excess brain fluid.

The substance’s role is to protect the brain and dilute the waste products it produces. Although radiologists have noted an excess of this fluid in some children for years, this is its first link to a disorder.

The researchers looked at infant siblings of children with autism. These infants are considered to be at a 20-fold higher risk of autism compared with the general population. Several teams are studying these so-called ‘baby sibs’ to look for early indicators of autism risk.

The new study found both an excess of brain fluid and the beginnings of brain enlargement in infants as young as 6 months of age.

“The idea that it’s already there at 6 months is very exciting,” says Joseph Piven, professor of psychiatry at the University of North Carolina, Chapel Hill, who was not involved in the study. Piven is also scanning the brains of baby sibs as part of the university’s Infant Brain Imaging Study.

Amaral and his colleagues first trained 33 high-risk babies and 22 controls to sleep wearing giant earphones that dull the clanks of the magnetic resonance imaging (MRI) machine. They were then able to scan the babies as they napped, avoiding the use of anesthesia. 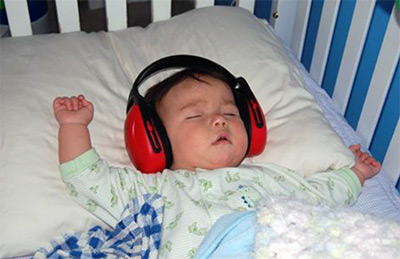 The researchers imaged the babies at either 6 or 9 months of age and then twice more at 6-month intervals. Of the 55 infants, 42 completed all three scans; 10 of the 33 baby sibs (and no controls) were later diagnosed with autism, and another 8 baby sibs (and 3 controls) with some form of developmental delay.

The researchers did not set out to look at brain fluid, but sent the brain scans to Sandra Gorges, a pediatric radiologist at the university, without revealing which scans belonged to the baby sibs.

Gorges says she saw a “generous” amount of brain fluid in several of the scans. “It’s not something I see uncommonly, but I was probably seeing a few more than usual,” she says.

Amaral’s team then developed a method to quantify the amount of brain fluid from the MRI scans.

The babies who went on to develop autism had about 20 percent more brain fluid than the controls at 6 to 9 months of age. They also had more fluid than those with other developmental problems, suggesting that the observation is specific to autism.

The excess fluid persisted in the children with autism up until the 2-year mark, and may last longer, says Amaral.

At 12 to 15 months of age, the children with autism also have brains that are on average 7 percent larger than those of controls. Younger babies also appear to have larger brains than controls do, even if the difference is not statistically significant, notes Eric Courchesne, professor of neuroscience at the University of California, San Diego, who was not involved in the study.

The amount of excess brain fluid is greater than would be expected for an enlarged brain, he adds. “This suggests that there is an additional pathological mechanism involved,” he says. “It will be very interesting to try to track this down.”

What’s more, the researchers found that more severe autism symptoms, based on the Autism Diagnostic Observation Schedule, are associated with more fluid in the brain.

“I don’t know that any of us know what this finding means, but it should be pursued,” says Piven.

Still, it is possible that the excess fluid contributes to autism risk, says Amaral. Cerebrospinal fluid collects many of the waste products produced by the brain — metabolic byproducts, immune molecules and chemical messengers — and flushes these into the body’s circulation. A build-up of brain fluid can occur when the valves that control this circulation are faulty, perhaps overexposing the brain to these molecules.

“It does make me wonder about all those kids I saw [excess brain fluid] in,” says Gorges. “Did they end up with a diagnosis of something or not?”

The next step is to confirm the finding in a larger group of baby sibs. Other brain imaging studies may also have detected this abnormality, Amaral says. For example, some studies have found that children with autism have atypical electroencephalography scans, and brain fluid is known to affect the readings3, he says.

Amaral’s team plans to collaborate with Piven’s lab to look for brain fluid in existing MRI scans from their studies.

“We have a ready dataset to follow up with this,” says Piven. “We won’t have to wait another ten years.”