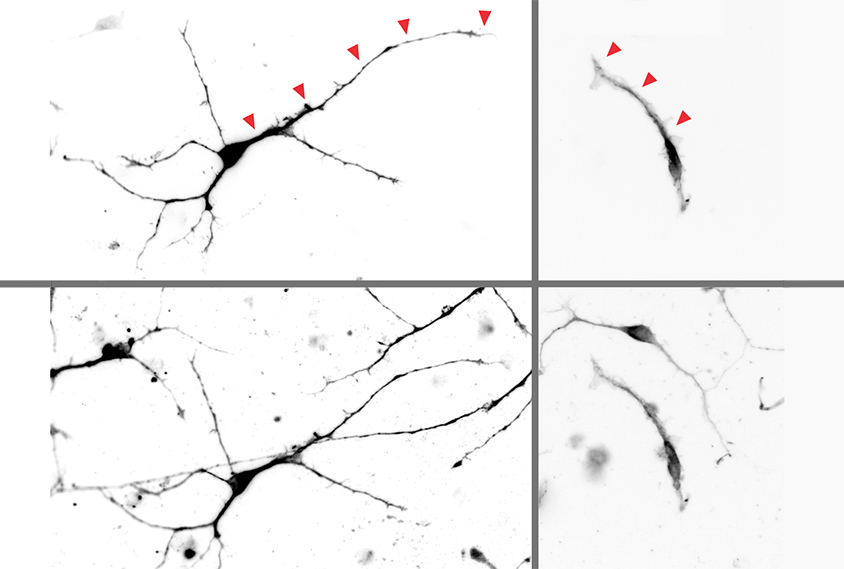 Inhibiting an overactive protein complex restores typical growth to human neurons that express low levels of the autism-linked gene ASH1L, according to a new study.

Many people with mutations in ASH1L have autism, often with intellectual disability, seizures and a lack of brain growth after birth. But it has been unclear how the mutations lead to these traits.

Loss of the gene causes neurons to grow fewer and shorter projections called dendrites, according to unpublished data presented at the 2021 Society for Neuroscience Global Connectome by Sofia Lizarraga, assistant professor of biological sciences at the University of South Carolina in Columbia.

In the new work, Lizarraga and her team found that this undergrowth stems from an uptick in the activity of a protein conglomerate called Polycomb repressive complex 2 (PRC2), which suppresses gene expression by modifying how genetic material is packaged inside cells. With less influence from ASH1L, the team found, PRC2 runs amok, repressing genes that help neurons grow.

Drugs that suppress PRC2 activity may be useful as a treatment for people with ASH1L mutations, Lizarraga says, though the work is still “very preliminary.”

“It’s something that kind of gives us hope,” she says. “Maybe someday we can really gain enough knowledge about this mechanism that we can develop therapeutic strategies.”

The researchers used RNA fragments to turn down ASH1L expression in human cortical neurons. The neurons grew axons and dendrites that were shorter and had less branching than control neurons did.

Inhibiting the transcription-repressing component of PRC2, called EZH2, with the experimental drug EI1 improves the neurons’ development to levels close to those of controls.

“That to us was very exciting,” Lizarraga says, adding that the team is “trying to get more at the molecular mechanisms.”

In 2020, the U.S. Food and Drug Administration approved a similar EZH2 inhibitor to treat a rare form of cancer.

The ASH1L neurons also express unusually low levels of NTRK2, a gene that codes for a receptor involved in neuron arborization and maturation called TRKB, the researchers found. Treating the neurons with EI1 for five days increased expression of NTRK2, although that result was not statistically significant.

The findings were published in Molecular Psychiatry in February.

The ability to improve neuron maturation by targeting PRC2 is “exciting” because it demonstrates that the effects of ASH1L mutations on neuronal development can be reduced, says Sally Camper, professor of human genetics at the University of Michigan in Ann Arbor, who was not involved in the work.

The team’s approach could be used to isolate ASH1L’s effects in other neurons as well, Camper says.

The findings suggest that EI1 could be used as a treatment for autistic people with ASH1L mutations, says Jin He, assistant professor of biochemistry at Michigan State University in East Lansing, who was not involved in the work. But first the mechanism needs to be proved in animal studies, he says. A different cancer drug reduces some autism-like traits in mice missing ASH1L in the brain, He has shown.

Lizarraga and her team have used CRISPR to create neurons that carry ASH1L mutations found in people, she says, which they plan to use to measure changes in gene expression, cell structure and synapse activity more broadly. They also intend to look for differences in stem-cell-derived neurons originating from autistic people with ASH1L mutations, some of whom have additional traits, she says.