Different forms of autism have opposite problems with brain precursor cells 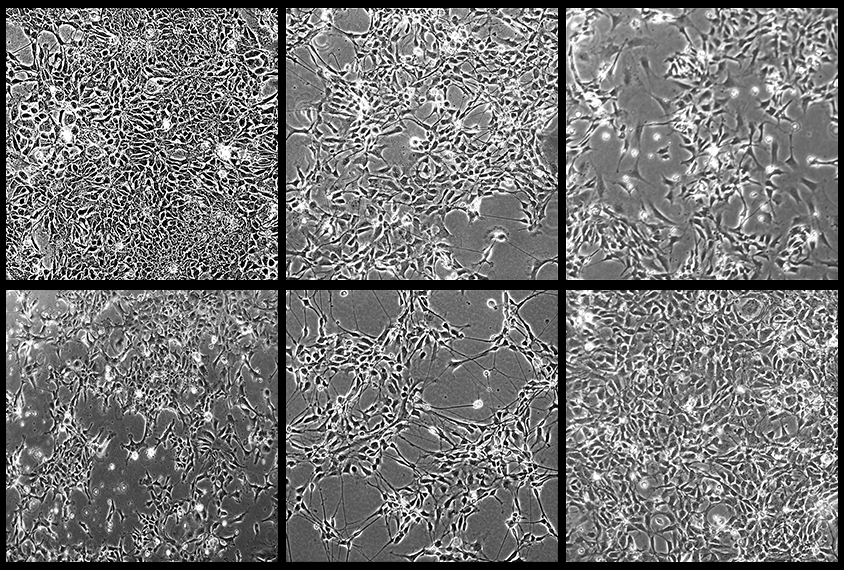 The primordial cells that give rise to most other brain cells do not proliferate in a typical way in autistic people — and that could explain how common traits emerge from a range of genetic origins, according to a new study.

The idea that autism disrupts the proliferation of neural precursor cells isn’t new, but until now, few studies had investigated how that difference arises.

In the new study, scientists fashioned neural precursor cells out of cord blood cells from five autistic boys ages 4 to 14 and, to serve as controls, either their non-autistic brothers or unrelated non-autistic people. Three of the autistic children have idiopathic cases, in which there is no known genetic cause for their autism; the other two have deletions in 16p11.2, a chromosomal region linked to autism and other neuropsychiatric conditions. Three of the autistic children have macrocephaly, or a large head.

Neural precursors from the autistic boys all proliferated in atypical ways, the scientists found. Among children with macrocephaly, this growth was accelerated, leading to 28 to 55 percent more cells than in the non-autistic controls after six days. In contrast, cells from the other two boys, both with idiopathic autism, grew more slowly and more of those cells died, yielding 40 to 65 percent fewer cells than in controls after six days.

“Despite the fact that these individuals are genetically distinct, especially the idiopathic individuals, it is amazing they have a common developmental process dysfunction — control of proliferation,” says study co-lead investigator Emanuel DiCicco-Bloom, professor of neuroscience, cell biology and pediatrics at Rutgers University in Piscataway, New Jersey.

This overlap suggests “this issue with proliferation control is a common and generalizable mechanism” in autism, he adds.

The gene MAPK3, which encodes an enzyme important in brain growth and development, lies within 16p11.2. Exposed to less of the enzyme’s active form, phosphorylated ERK1 (P-ERK1), neural precursors in the two boys with 16p deletions proliferated more, the scientists found. The opposite held true in boys with more P-ERK1.

Exposing highly prolific precursors to basic fibroblast growth factor (bFGF), which stimulates the ERK pathway, led to a 15 to 30 percent reduction in DNA synthesis in those cells compared with controls; cells with reduced proliferation, however, saw a 15 to 20 percent increase. This discrepancy suggests that atypical proliferation stems from changes in cell signaling.

Stem cells derived from blood cells of the children with idiopathic autism — an intermediate step to generating precursor cells — proliferated typically, whereas those from boys with 16p11.2 deletions showed heightened proliferation. The scientists detailed their findings May 26 in Stem Cell Reports.

“I am very excited about the idea of convergence between risk variants for psychiatric disorders — in this case, idiopathic and 16p11.2,” says Kristen Brennand, professor of psychiatry and genetics at Yale University, who did not take part in this research. “Even if the direction and magnitude of effects are different, it’s intriguing that the same pathway is being hit.”

The results mirror what “is sometimes termed the ‘Goldilocks effect’ in autism genetics, [in which] either increased or decreased dose or activity of the same gene can lead to risk of autism or another neurodevelopmental disorder,” says Jeremy Veenstra-VanderWeele, professor of developmental neuropsychiatry at Columbia University, who was not involved in the study.

“These findings suggest that this could be the case for neural precursor cell proliferation generally and perhaps also for response to basic FGF and even ERK signaling in some individuals,” he says.

Most of the disruption in brain development in people with autism likely “occurs prenatally but manifests during childhood,” DiCicco-Bloom says. The results hint at a potential way to diagnose autism earlier in childhood — by taking blood cells, generating neural precursor cells and examining if they proliferate atypically. “Then interventions might be employed earlier,” DiCicco-Bloom says.

And investigating how autism alters the activity of enzymes such as P-ERK1 could lead to drugs or molecular tools “to repair functional abnormalities, which might have an impact, though this is long into the future,” DiCicco-Bloom says. Drugs that target P-ERK1 already exist, so clinical trials may one day test such drugs in autistic children who have known problems with this enzyme, he says.

Next, the researchers plan to study more children with idiopathic autism, as well as those with syndromic forms of the condition, such as fragile X syndrome, Rett syndrome and tuberous sclerosis complex, to see if problems with neural proliferation also occur in all these scenarios, DiCicco-Bloom says.

Other future experiments should include “following these precursor cells longer to evaluate formation of more mature neurons, or even organoids,” Veenstra-VanderWeele says.