Debate over quality of adult-derived stem cells rages on 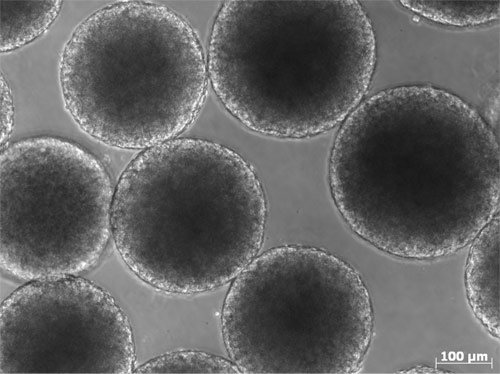 After listening to a recent talk on induced pluripotent stem (iPS) cells — adult cells that have been reprogrammed to a more flexible state — a researcher who studies autism joked that his department head told him he had better start collecting skin cells from study participants or risk not getting tenure.

His joke illustrates how widespread the use of these cells has become since they were developed less than a decade ago1. Their allure, especially for neuroscientists, stems from the fact that the cells can theoretically be differentiated into any cell type in the human body. Researchers can generate neurons from healthy people and compare them to those derived from people with different disorders to search for molecular and cellular flaws.

But as more money is being poured into the field, some are worried that the technique is not yet robust enough to truly reveal the underpinnings of human disease.

The major issue concerns the variability among different lines of cells. iPS cells are created by taking skin cells or other mature cells from an individual and adding them to a specific cocktail of chemicals, which returns them to a stem cell, or immature, state. But individual iPS cells vary in their ability to differentiate into specific types of adult cells. Even under the same laboratory conditions, one cell line might give rise to a large percentage of neurons while another might be much less efficient.

That variability stems from both their genetic background and the way they are isolated, says Rudolf Jaenisch, professor of biology at the Massachusetts Institute of Technology. Then the problem becomes, “If you find differences between diseased and healthy cells, is it due to the disease or to system variation?”

Over the last few years, researchers have developed iPS cells from people with autism-related disorders, including Timothy syndrome and Rett syndrome, and used them to pinpoint differences between those cells and others derived from typically developing individuals2,3. Cells derived from individuals with Rett syndrome, for example, tend to have smaller cell bodies and develop fewer synapses, which researchers say mirrors findings in animal models of the disease.

But previous research has suggested that the reprogramming process does not completely erase all the markings of the adult cell from which it is derived, a likely source of variability. This could prove a particular problem for disorders linked to genetic defects on the X chromosome, including the autism-related disorders Rett syndrome and fragile X syndrome. Because women have two copies of the X, one is randomly inactivated in all adult cells. That process appears to be variably affected during the reprogramming and differentiation of iPS cells and could influence the subsequent expression of many genes in the cells.

Two new studies published 4 May in Cell Stem Cell aim to clarify this issue by systematically analyzing X chromosome inactivation in iPS cells. One study, which analyzed more than two hundred lines of human stem cells, found considerable variability in expression of genes on the X chromosome4,5. Both found that iPS cells initially maintained the inactivation pattern of their parent cells but gradually lost it, eventually expressing both copies of genes on the X.

In the second study, researchers analyzed a stem cell model of Lesch-Nyhan syndrome, a severe neurological disorder caused by mutations in the X-linked HPRT gene. Neurons derived from newly created iPS cells initially showed clear signs of disease, including shorter neural projections, then lost these traits as they went through more rounds of cell division.

This could explain some inconsistencies in iPS cells derived from people with Rett syndrome. In some studies, iPS cells from individuals with Rett seem to maintain the inactivation of their parent cell, while others reactivate both copies of the gene6.

As concerns over variability grow, some of those who have been working with these cells since the get-go are now trying to find ways around the problem.

One approach to distinguishing changes that truly result from the disease-linked mutations rather than from the reprogramming process is to examine many cell lines, both from the same and different individuals, searching for changes that occur in a number of patient-derived lines but not in controls. But researchers say that is an expensive and time-consuming approach that is not practical for most labs. It costs about $7,000 to $15,000 to generate a single iPS cell line, which doesn’t include the cost to differentiate the cells into neurons and the subsequent analysis. Researchers typically create about three lines per person.

Jaenisch plans to study iPS cells from people with Rett syndrome, which is caused by mutations in a known gene. Rather than comparing these Rett iPS cells to cells from typically developing people, his team will correct the genetic defect in the same line of Rett cells. That will create a more closely matched control.

“Now you have two pairs of cells that are genetically identical and identical in derivation, so you’re comparing apples and apples,” says Jaenisch. “If you then find a difference between these lines, you can be reasonably confident that it is disease-relevant and not caused by differentiation.”

However, this approach will only work for monogenic diseases in which the responsible gene is known. Given that polygenic disorders and those of unknown genetic cause, including most cases of autism, are much more common, researchers need to find other solutions.

Alysson Muotri, assistant professor of cellular and molecular medicine at the University of California, San Diego, and one of the scientists who first created iPS cells from people with Rett, aims to reduce variability by improving the method for making neurons from iPS cells. At a conference in Switzerland last month, he described a systematic approach for creating new media for growing neurons.

“We tried every condition for every ingredient in the stem cell media,” he says, eventually creating a brew with fewer ingredients that can be created in large volumes. “The medium was able to reduce the variability in our neuronal differentiation protocol, and the number and quality of the neurons we get are more homogenous and consistent.”

Thomas Südhof, professor of molecular and cellular physiology at Stanford University in Palo Alto, California, says it’s elegant work. But he is concerned that it doesn’t address the core problems associated with generating different cell lines from the same parent cell.

Solving these questions might require larger-scale efforts, such as a new project at the Allen Institute for Brain Science in Seattle, which will focus in part on developing standardized methods for creating iPS cells and specific neuronal cell types, which will then be distributed to the broader research community.

“It’s going to be expensive to do right, but it’s important because it will help us decide if this is something we can use,” says Huda Zoghbi, professor of molecular and human genetics at Baylor College of Medicine in Houston. “We need to answer questions like how many cell lines need to be generated per person” to get a reliable result. She also points to the importance of publishing negative results, since scientists outside the field might not have a good sense of the level of variability inherent in this technique.

Academic researchers aren’t the only ones interested in iPS cells. Pharmaceutical companies are beginning to use these cells to try to identify molecular and cellular deficits associated with specific disorders.

Roche, for example, aims to employ these cells to better understand neurodevelopmental disorders and help focus its drug development efforts.

“We plan to use them not just for drug screening, but to gather more information on the convergence of molecular pathways,” says Luca Santarelli, head of neuroscience at Roche.

Researchers there will create cell lines from people that have genetically defined types of autism, such as fragile X syndrome. Once they create neurons from these cells, “we will start studying those signatures we can see in different genetic types of the disorder,” he says.

But before they start, researchers are assessing the technology and identifying whether the variability among cell lines is smaller than the variability caused by disease-linked mutations.

Here, pharmaceutical companies have an advantage over most academic labs, thanks to greater resources and experience with large-scale standardization. Roche scientists will create several cell lines from each individual, as well as from each skin cell, in order to measure the variability of the procedure.

“If [changes caused by the disease-linked mutation] are washed away by the amount of variability the technique produces, then we have a problem,” says Santarelli. “But I don’t think anyone knows yet the endgame on that.”