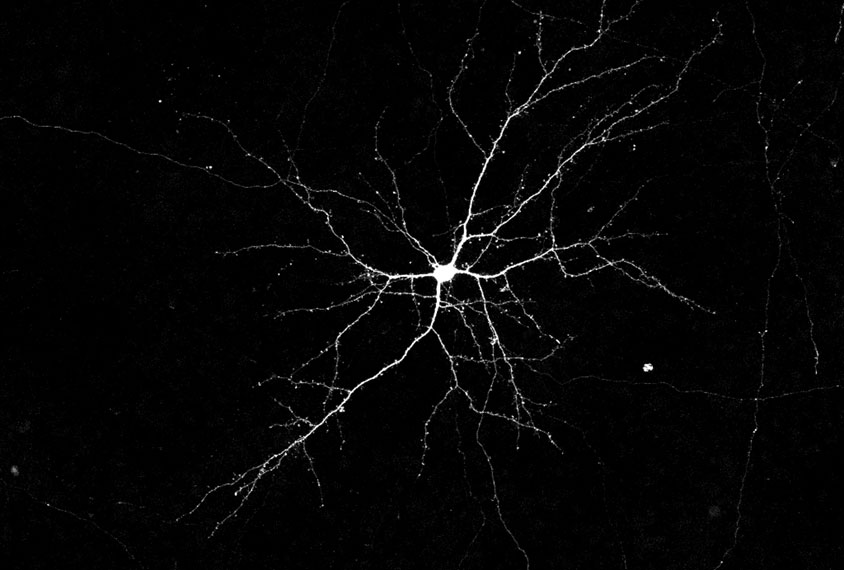 Missed connections: Dendrites are necessary for neuronal communication, but male mouse neurons without the autism-linked gene DDX3X grow few of them.

Loss of the autism-linked gene DDX3X prevents male, but not female, mouse neurons from properly growing the branches needed to communicate with other cells.

Researchers presented the findings virtually today at the 2022 International Society for Autism Research annual meeting. (Links to abstracts may work only for registered conference attendees.)

Loss-of-function mutations in the gene lead to DDX3X syndrome, which is characterized by intellectual disability and, often, autism. Because the gene is on the X chromosome and people need one functioning copy to survive, the syndrome largely affects girls, who retain a functioning copy. Of the 848 people known to have the condition, just 39 are boys, according to the DDX3X Foundation.

Most, if not all, of the boys inherited a milder mutation in the gene from their mother, who is unaffected, says lead investigator Silvia De Rubeis, associate professor of psychiatry at the Seaver Autism Center for Research and Treatment in New York City.

DDX3X is expressed at higher levels in female mice than in male ones — and the same holds true for girls versus boys, previous work has shown.

“One of the fundamental questions we are trying to address is, ‘Why would female humans and mice need more DDX3X in their brains than males?’” De Rubeis says.

The researchers turned down the expression of one copy of DDX3X — mimicking the effects of mutations seen only in girls — or eliminated the gene entirely in both female and male mouse neurons.

“The males seem to be more vulnerable,” De Rubeis says, “as it relates to synaptogenesis.”

DDX3X and other genes that regulate translation are overexpressed in female neurons missing one copy of the gene, compared with male neurons with the same loss.

Those genes could be potential therapeutic targets for people with DDX3X syndrome, De Rubeis says.