Injecting the gene-editing tool CRISPR into the brains of adolescent mice counteracts the effects of a mutation in a top autism gene. The finding suggests that mutations in this gene, SCN2A, may be treatable at any age.

“This gives us hope that this is something that’s not just a developmental deficit, and that once all the changes are there that you’re stuck with them,” says Perry Spratt, a graduate student in Kevin Bender’s lab at the University of California, San Francisco. Spratt presented the unpublished findings today at the 2019 Society for Neuroscience annual meeting in Chicago, Illinois.

SCN2A encodes a sodium channel that helps neurons propagate electrical signals. The mice have a harmful mutation in one copy of the gene, causing their neurons to fire sluggishly and make immature connections. The treatment reverses the problem by ramping up expression of the intact copy.

The first inkling that the reversal might work even after infancy came in June: The team reported then that introducing an SCN2A mutation into adolescent mice has many of the same effects on neurons as a mutation present from conception.

“At the cellular level we see a lot of the same deficits as we see when the gene’s been gone throughout life,” Spratt says.

The team engineered mice in which the mutation in SCN2A can be corrected by injecting an enzyme called Cre recombinase. 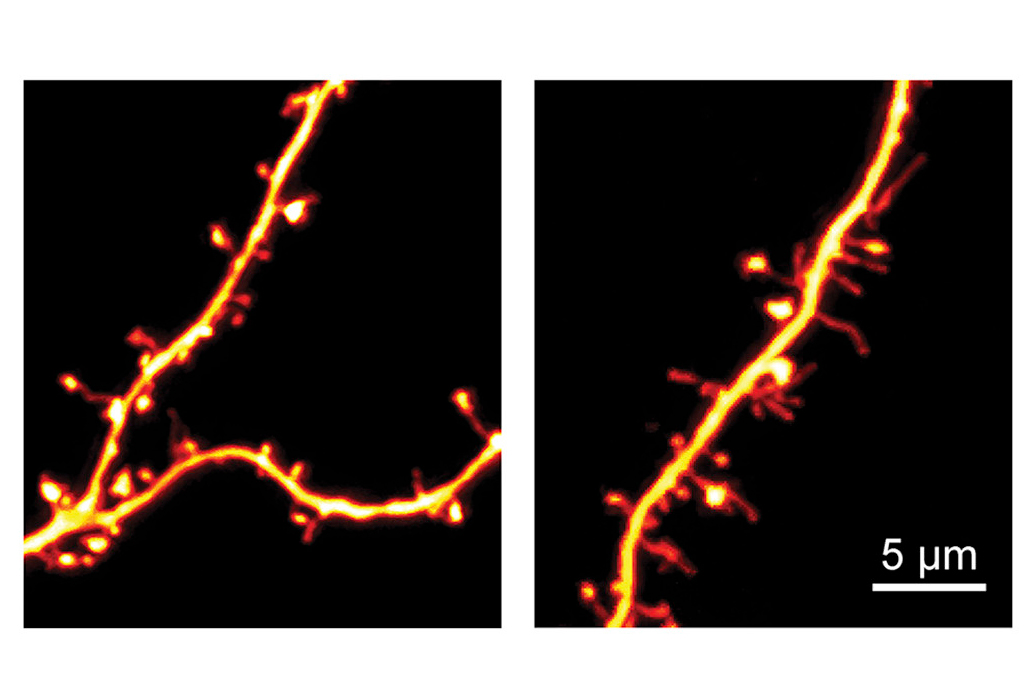 Running short: Neurons from mice missing SCN2A (right) have signal-receiving branches that are less mature than those in controls (left).

Injecting the Cre enzyme into the brains of 4- to 5-week-old mutant mice restored normal expression of SCN2A. It also reversed the problems in the mice’s neurons.

But this strategy cannot be applied to people because it would require genetic engineering of embryos. So the researchers created a virus that ferries a modified version of CRISPR into cells. This version of the editing tool does not snip DNA but can instead activate any gene.

The researchers injected the virus into the brains of 4-week-old mutant mice, along with synthetic RNA snippets designed to guide CRISPR to SCN2A. The treatment boosted SCN2A expression and reversed the problems in the mice’s neurons.

The team also tested one important control: They found that the treatment does not cause neurons to become hyperactive — and so does not run the risk of triggering seizures.

“The remarkable thing about this is that it can go gangbusters without making the cells hyperexcitable,” says Bender.

The team is testing ways to deliver the virus to the whole brain. They also plan to test whether CRISPR reverses learning and memory problems in the mutant mice.