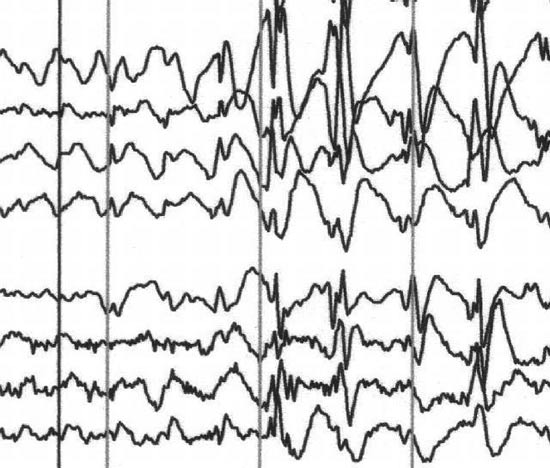 Sharp divide: Scientists do not agree on whether children with regressive autism are more likely to have distinct features, such as EEGs that indicate epilepsy.

Children with autism may show signs of the disease when they are younger than a year old, say some scientists.

But parents and pediatricians of some children with autism maintain that their children developed normally in the first two years of life ― making eye contact, waving goodbye, even saying a few words. Then these children seemed to abruptly lose these skills.

This ‘autistic regression’, reported in about one-third of children with the disorder, is baffling researchers.

“We haven’t found any biological markers to say why this child regressed and another didn’t,” says pediatrician Michael Davidovitch, chairman of the Israeli Association of Child Development and Rehabilitation. “And we don’t know if their prognosis will be better or worse.”

About 20 years ago, researchers began asking whether autistic regression could be a distinct subgroup of autism, with its own telltale biological markers. Since then, dozens of contradictory behavioral, physiological and genetic studies have left the field no closer to finding the answer.

Some researchers are trying to tease out differences between the two groups in specific behavioral skills. So far, they too have failed to find any significant differences.

If researchers could find regression to be a distinct phenotype, they might be able to better understand autism spectrum disorders, and clinicians could make more confident predictions about a child’s prospects.

But some experts are skeptical that regressive autism and early-onset autism are distinct types of the disorder.

“It’s been a very, very hot thing to study,” says cognitive scientist Tony Charman of University College London. “Some people are pinning their lots on regression being a good subgroup. But the evidence for it being a meaningful subgroup is still very equivocal.”

Starting in the late 1980s, several studies found that children with autism who had regressed in their first year of life tested between ages 3 and 6 with lower IQs and language levels than those who had early-onset autism1. But a decade later, some follow-up studies found no difference between the two groups of children2.

A slew of epidemiological studies over the following few years a showed no causal relationship between MMR and autism. They also showed no difference in intestinal inflammation between children with regressive autism and those with early-onset autism4.

Around the same time, other researchers were looking for an association between regressive autism and epilepsy. It was a plausible idea: all children with Landau-Kleffner syndrome ― a disorder in which children suddenly lose the ability to understand and use verbal language ― show abnormal electrical patterns in their brain waves, which is similar to what happens in epilepsy.

In 1997, neurologists at Miami Children’s Hospital analyzed sleep electroencephalograms (EEGs) ― which measure brain activity during sleep using electrodes on the scalp ― of about 500 children with autism.

Of the children who did not have overt epilepsy, the researchers found epileptic-like EEG readings in 14 percent who had undergone regression and only 6 percent of those with early-onset autism5. However, when Charman and his colleagues conducted a similar study with 64 children, they found no significant difference between the two groups6.

The genetic front is likewise confusing, with different methods garnering different results. If regressive autism were a genetically distinguishable subtype, then it would be likely to run in families.

But in 2006, Jeremy Parr of the University of Oxford completed a genetic linkage study showing that multiplex families ― those with two or more children with autism ― are no more likely than average to share genes that had been previously linked to regression7.

However, a study published in January by a group at the M.I.N.D. Institute at the University of California, Davis, found that 494 genes are expressed differently in the whole blood of children with regression and those with early-onset autism8. So many differences, they wrote, suggest that regressive autism and early-onset autism are “distinct biological disorders.”

Charman is unsurprised by the results and is critical of this latest wave of research, which he says is looking for links between regression and behaviors that are “not mechanistically plausible.”

“People who do these studies of subtyping without thinking why they’re doing it are probably being rather unhelpful,” he says.

Weighing these conflicting results, some researchers say that all autism could be considered “regressive.”

“The fact that some children have regressive autism depends very much on what people mean by that word,” says psychologist Ami Klin of the Yale Child Study Center.

Most examples of autistic regression, Klin points out, are based upon a child’s loss of a handful of words. Klin says that it’s possible that these children were only echoing sounds they heard from their parents, “without necessarily making them an act of true communication” ― much like congenitally deaf children sometimes babble even though they do not understand the words.

Regression has also been documented in the rare childhood disintegrative disorder, in which children show a dramatic loss of thinking, communication and language skills after two to four years of normal development.

“Now that’s a regressive syndrome,” Klin says. “Some kind of neurobiological thing is going on inside these children, perhaps the accumulation of some compound, and then there is a tipping point and they regress.” But because autistic regression is much less clearly defined, Klin says the same thing is unlikely to be happening in children with regressive autism.

The definitive answer to these lingering questions may lie in prospective studies under way on the younger siblings of children with autism.

“If we start looking at these children from the first year of life, then maybe we’ll see that the proportion who seem to [regress] is higher than we thought it was,” Charman says.

Preliminary results from these sibling studies, however, suggest that agreement on the regression issue is still far off.

Babysib research done by speech pathologist Rebecca Landa at the Kennedy Krieger Institute in Baltimore, for instance, suggests that regression might be more common than current published estimates. “Our data show that even if you have early-onset autism, you can still show this worsening of symptoms over time,” she says.

But ongoing studies of infant siblings at the M.I.N.D. Institute and at the University of California, Los Angeles, have found the opposite.

Rogers reports that of the 185 siblings of children with autism seen so far at both sites, 30 have been diagnosed with autism, and none have shown classic regression. “What exactly that means still lies ahead,” she says. “But it sure makes us think differently about it.”