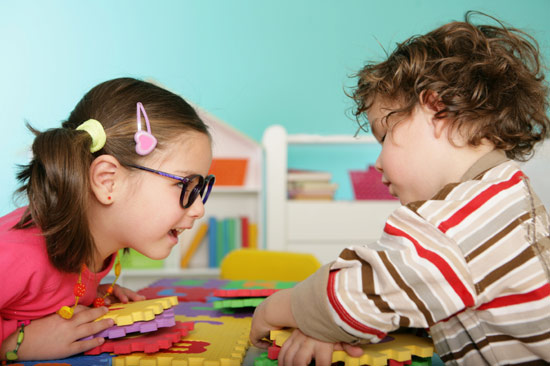 Word power: Children with autism use the same types of words as do those who have only language delay.

Toddlers with autism take longer to build their vocabulary than do those who have only language impairment, according to a study published online in November in The Journal of Developmental Disorders. When matched by vocabulary level, however, the two groups use the same types of words and have the same grammatical skills.

At the same vocabulary level, however, both groups of children use similar numbers of words from different categories, such as toys, food, helping verbs or asking questions. Late-talkers use more words referring to clothing, the only difference between the two groups.

The two groups also use the same number of words to convey thoughts and emotions, the study found. By contrast, previous studies have reported that children with autism use fewer of these kinds of words, which are believed to be involved in ‘Theory of Mind’ — the ability to understand other people’s thoughts. This difference could be because the new study does not take into account how often the children use these words and in what context.

Both groups of children are also equally likely to combine words, an indication that they understand grammar, the researchers found.

These results suggest that although the reasons for language delay may be different between the two groups, the nature of their speech and vocabulary is the same.

A limitation of the study is that it relies on parents’ reports of their children’s word usage from a limited selection of available categories. The authors intend to pursue larger studies across different age groups.