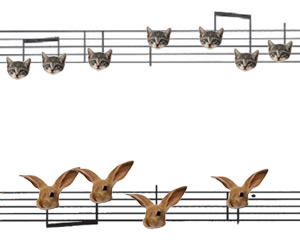 Animal song: Children with autism are adept at remembering which animal prefers a certain melody. They’re also better than controls at hearing a 25-cent difference in pitch (click below to listen).

Children with autism are better than controls at remembering melodies and detecting differences in pitch, according to a study published 13 November in Autism1.

People with autism may have trouble perceiving emotion, but they do have an emotional response to music — even if they can’t express it, according to some studies.

They may also have better pitch perception than controls do. According to one parent-report study, people with autism are about 500 times more likely than the general population to have absolute pitch — a savant-like skill that allows an individual to classify pitch completely out of context.

This affinity with music suggests that music could be incorporated into autism therapies, the researchers say.

In the new study, researchers looked at pitch perception in 25 children with autism and 25 typically developing children between 7 and 13 years of age. Two children in each group had played piano or had been in a band.

The children listened to pairs of single notes that were either identical or differed by 25, 35 or 45 cents — a measure of pitch. (There are 1,200 cents in an octave.) The children also listened to short melodies in which a note of the second bar occasionally varied in pitch.

Overall, children with autism are better able than controls to detect differences in pitch, the study found. These differences are statistically significant for 45-cent variations in single notes and for the 25- and 35-cent differences in melodies.

Children with autism are better than controls at detecting pitch in melodies than in single notes, suggesting an enhanced ability to detect patterns, the researchers say. Studies have shown a similar skill with visual patterns in people with the disorder.

The children also played a computer game designed to help them memorize which of four animals prefers one of four melodies, each in a different key. One week later, the children listened to these melodies again and tried to identify the associated animal.

Children with autism are better than controls at remembering the melodies, the study found. What’s more, eight children with autism, but only two controls, correctly identified at least 15 of the 16 melodies. One 8-year-old boy with autism who was fidgety and appeared not to be paying attention had a perfect score, the researchers note.

Of the 25 children with autism, 14 have an aversion to loud sounds, according to their parents. These children do not have better pitch perception than the other children with the disorder, the study found.