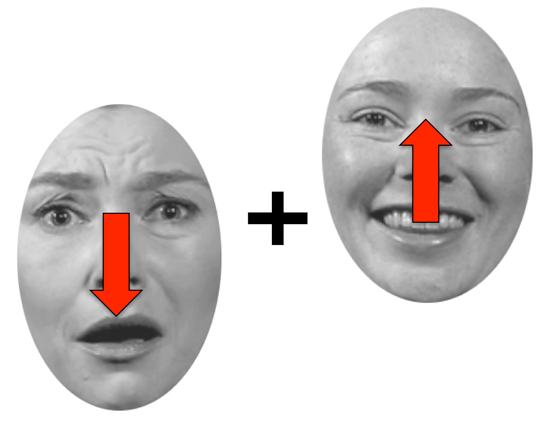 &nbsp;Dorit Kliemann Eye contact: Those diagnosed with autism shift their gaze from the eyes to the mouth (left) more often than from the mouth to the eyes (right).

Individuals with autism spend less time looking at the eyes than at the mouth because they actively shift their gaze away from the eye region, according to a study published in September in the Journal of Neuroscience.

Several studies have shown that individuals with autism tend to avoid eyes when looking at faces.

The reason for this tendency has been a matter of debate. Some studies have suggested that those with the disorder are not drawn to eyes because they are not tuned in to social cues. Others have concluded that those with autism actively avoid the eye region.

The new study resolves this issue by following the participants’ gaze after they start out looking at either the mouth or the eyes.

The researchers showed images of happy, fearful or neutral faces to 11 adults with a diagnosis of autism and 12 controls. The participants initially focused on a cross on a blank screen, which then directed them to the eye or the mouth region of an expressive face. The next screen asked the participants to identify the emotion they had just seen.

Those diagnosed with autism shift their gaze from the eyes to the mouth more often than they shift it from the mouth to the eyes, whereas controls do the opposite, the researchers found.

Healthy controls also show different gaze patterns for different emotions — looking at the eyes more often in fearful and neutral faces than in happy ones. Those with autism show no preference for the eyes based on different facial emotions.