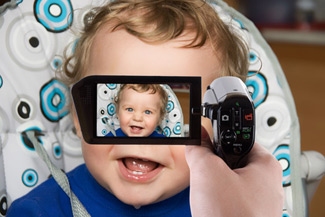 Play it again: Videos of infant siblings of children with autism at age 1 suggest that the number of repetitive movements doesn’t predict which ones will develop the disorder.

Infant siblings of children with autism show more repetitive movements as 1-year-olds than do children who do not have a family history of the disorder, according to a study published 19 October in the Journal of Autism and Developmental Disorders1.

Many researchers are studying infant siblings of children with autism, so-called ‘baby sibs,’ for clues to the first signs of the disorder. Baby sibs have up to a 20-fold increased risk of developing autism compared with the general population.

Restricted and repetitive behaviors and interests such as rocking and hand-flapping are among the core symptoms of autism, and may be among the first to show up2.

In the new study, researchers analyzed videos of children taken when they were 12 to 24 months old and measured their repetitive behaviors. They also categorized the different types of movements, including hand-flapping, stiffening or patting certain parts of the body, and repeatedly spinning, rolling or clutching a toy.

The study participants included 20 baby sibs, 8 of whom were later diagnosed with autism and 12 who were not, and 20 younger siblings of typically developing children.

Baby sibs have more repetitive movements than controls do, the researchers found. This is true even of the baby sibs who do not go on to develop autism.

A 2008 study found that 18- to 24-month-old babies who are later diagnosed with autism have more repetitive behaviors than those who do not develop the disorder3. This suggests that repetitive behavior is a marker for autism risk in the general population.

The results suggest that the type of repetitive movements, rather than the rate, indicates autism risk in baby sibs, says lead investigator Wendy Stone, director of the University of Washington Autism Center in Seattle.

Larger studies are needed to confirm these findings, Stone says. The study included only 40 children because the groups were matched for both chronological age and mental age at the time the videos were taken. Other studies have suggested that both of these variables can affect repetitive behaviors in children.