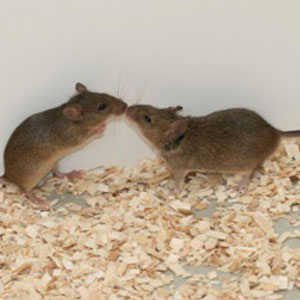 Mice lacking EN2, an autism-linked gene, have a range of behavioral problems, including social deficits, problems with learning and memory, and motor abnormalities, according to a study published 19 July in PLoS One1.

EN2 regulates the expression of genes that influence how the brain is organized during development. Two genetic variants of EN2 linked to autism boost levels of the protein.

In the new study, researchers characterized mice lacking the EN2 gene using a battery of behavioral tests. Juvenile mice lacking EN2 interact less with another mouse than controls do, the study found. Unlike controls, adult mutant mice prefer to spend time with an object than with another mouse, and male adult mice tend not to approach a female mouse in heat.

The mutant mice also struggle with tasks that require learning and memory skills. They tend to forget the location of a hidden platform in a water maze and that a shock follows a certain sound.

The mice give up when forced to swim for long periods of time, which researchers take to be a sign of depression. They also have mild problems with motor skills, such as a tendency to fall off a rotating cylinder and a weak grip on a horizontal bar.

However, their ultrasonic vocalizations — inaudible to the human ear — are normal, and they do not show obsessive self-grooming. Researchers use these features to represent the language deficits and repetitive behaviors seen in individuals with autism.

These mice lack the EN2 protein, whereas the genetic variant associated with autism leads to elevated levels of the protein. But disrupting a signaling pathway in either direction can lead to similar effects, the researchers say.