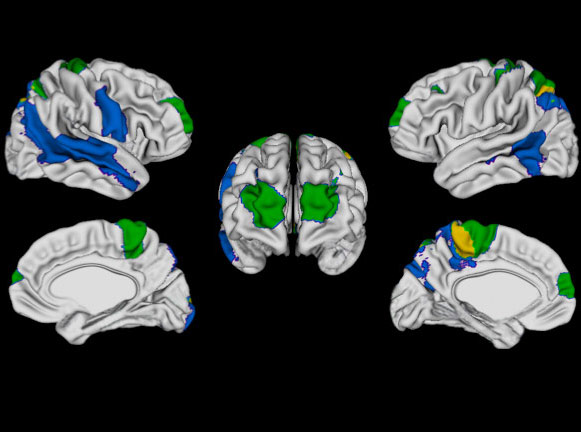 Road map: Individuals with autism-like traits have alterations in different brain regions (blue) than those with features of antisocial disorder (green).

Autism and antisocial disorder are separate conditions, with distinct differences in underlying brain structure, according to a neuroimaging study of the general population. The results were published 4 April in The Journal of Neuroscience1.

Social deficits, such as a lack of attention paid to social cues and avoidance of eye contact, are a core feature of autism. Because of this, autism is often conflated with antisocial disorders, which are characterized by fear and anxiety in social situations. Genetic studies have shown that the variants underlying both disorders are distinct, however2.

In the new study, researchers used structural magnetic resonance imaging (MRI) to look at whether there are differences in brain structure that are associated with either autism-like or antisocial traits in 323 typically developing individuals, ranging from 3 to 30 years of age. The participants’ parents had completed the Social Responsiveness Scale (SRS) and the Antisocial Process Screening Device (APSD), which measure the severity of social impairments in autism and antisocial disorder, respectively.

Certain brain regions are smaller in individuals who have more autism and antisocial traits compared with those who have fewer traits, the study found. The brain regions associated with autism are also distinct from those linked to antisocial disorder, with very little overlap.

For example, higher scores on the SRS, an indication of more traits of autism, are associated with a thinner right superior and middle temporal gyrus, a brain region that plays a role in language and has been linked to autism in previous studies. By contrast, individuals with higher scores on the APSD have less brain matter in the anterior middle frontal gyrus than those with lower scores.

The association between the structural changes and behavioral measures is not influenced by the age of the participants, providing further support for the theory that the structural differences underlie the traits, the researchers say.