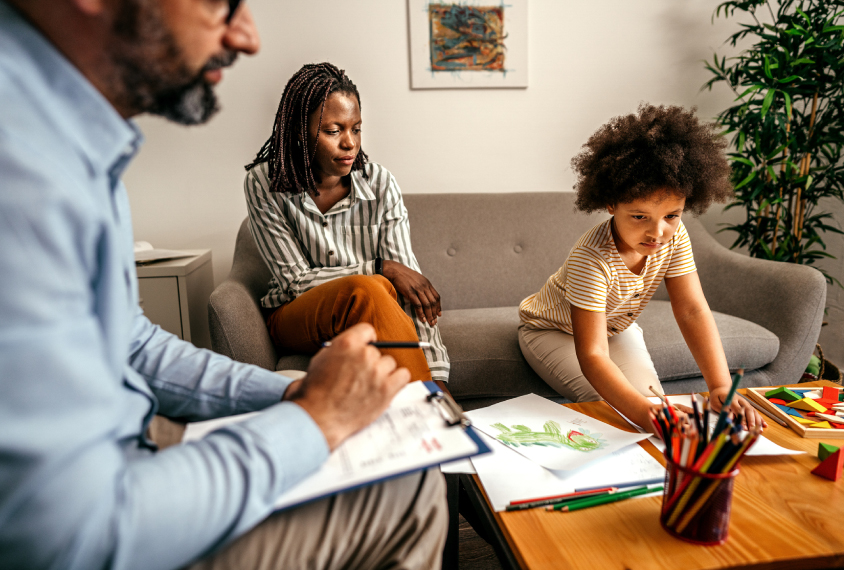 Lower scores: Clinicians were more likely to say that their ADI-R evaluations were “low quality” for Black mothers, a bias that persists across multiple sites in the United States.

Clinicians who interview caregivers as part of an autism diagnostic test called the Autism Diagnostic Interview-Revised (ADI-R) are 65 percent less likely to rate their examinations as “high quality” for Black mothers than for white or Hispanic mothers. There was no such effect when clinicians administered another test, the Autism Diagnostic Observation Schedule (ADOS), to the children of these women.

Researchers presented the findings yesterday at the 2022 International Society for Autism Research annual meeting. (Links to abstracts may work only for registered conference attendees.)

The findings are based on 1,078 families enrolled in the Study to Explore Early Development, a multi-site, multi-year study funded by the U.S. Centers for Disease Control and Prevention. Clinicians in the study used the ADOS to evaluate children in each family between 30 and 68 months of age. And they used the ADI-R to interview the parents of those same children. About 45 percent of women who participated in the study identified as white, 28 percent as Black and 16 percent as Hispanic.

At the end of either assessment, 27 clinicians at six sites rated their overall confidence in the quality of their exams on a scale from zero (very poor quality) to three (high quality). Clinicians were told to give this score based on their rapport with the woman or her child: “How did it go? Did we have a good conversation? Do I feel like I was getting good information and good data?” Fitzgerald says.

For the ADOS, the researchers didn’t find any differences in clinician quality scores among racial groups after controlling for a slew of factors, including maternal education, family income, the child’s sex, or autism severity and IQ scores.

But clinicians were significantly less likely to rate their assessments as “good quality” when administering the ADI-R to Black women — a discrepancy that was consistent across the six sites. Interviews with Black women also had a higher fraction of “very poor” clinician ratings when compared with interviews with white or Hispanic women, according to the researchers.

It’s possible that there are word choices or cultural assumptions in the ADI-R that make it more difficult for Black mothers to answer questions, Fitzgerald says. Or perhaps implicit bias on the part of the clinicians is to blame, he adds.

“There were some differences across sites, but we saw the same pattern across all of them. African-American moms were getting rated lower,” Fitzgerald says. “So, if this is implicit bias, it’s not driven by one clinician, or one group of clinicians. It’s happening across six different sites.”

The study involved just 27 clinicians, so the effect may not persist across larger datasets. And the study doesn’t include racial data on the clinicians, so it’s unknown if this bias persists for non-white clinicians. But the findings are still concerning, Fitzgerald says, because each of these clinicians has “research reliable” training, which means they are highly qualified to administer the ADOS and ADI-R. What sorts of biases, then, might be happening out in the real world? he asks.

A separate study based on data from 441 children between 2 and 17 years of age found that the ADI-R was just as effective for Black and white children. But in some cases, when the ADI-R is administered to toddlers younger than 4 years, diagnoses were more accurate for Black children. That study included 84 children who identified as Black and was presented as a poster today.

We changed a word to clarify that clinicians in the study were research reliable, which means they’ve received a higher level of training in administering the ADI-R and ADOS.