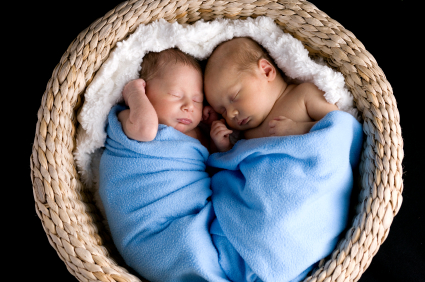 Tiny twin: Although identical twins share the same birth environment and their genes, the smaller of the two is more likely to have autism.

When twins differ in their diagnosis of autism, the twin with the lower birth weight is about three times more likely to develop the disorder than his or her sibling, according to a study published in the December issue of Psychological Medicine1.

The results suggest that low birth weight is associated with autism. Because twins generally have a lower birth weight than single births, this result may be specific to twins, however.

Several studies have linked low birth weight to autism in single births. These include a report published in October showing that young adults who weighed 4.4 pounds or less at birth are five times more likely to have autism than those who weighed more2.

The association between birth weight and autism is difficult to parse out, however. For example, the same genetic risk factors could cause both autism and low birth weight.

In the new study, researchers examined birth weight and autism among 5,561 twin pairs who are part of the Child and Adolescent Twin Study in Sweden. They measured autism symptoms using the Autism–Tics, Attention Deficit Hyperactivity Disorder and Other Comorbidities Inventory, a diagnostic questionnaire based on autism criteria outlined in the Diagnostic and Statistical Manual of Mental Disorders IV. Of the 5,561 twin pairs, 127 pairs have only one child with autism symptoms and 18 pairs show signs of autism in both children.

Overall, autism-like symptoms are more prevalent in the babies that have the lowest birth weight, the study found.

Among the 127 twin pairs that differ in their diagnosis of autism, 78 are same-sex pairs. Of these, 34 pairs differ in their birth weights by either 400 grams or 15 percent. In 26 of the 34 pairs, the twin with the lower birth weight is the one who has autism, the study found.

Across all 78 same-sex twin pairs, every increase of 100 grams in birth weight leads to a 13 percent lower risk of having autism, the study found. This ratio is essentially the same for 20 identical and 44 fraternal twin pairs, suggesting that the difference in risk is not the result of genetic factors.

Instead, environmental factors that restrict the birth weight of only one twin may also be responsible for the difference in diagnosis, the researchers suggest.

The study is limited by the fact that it relies on a questionnaire to diagnose autism rather than more rigorous clinical assessment, the researchers say.

Correction: This article has been modified from the original.The name of the journal in which the study appeared has been corrected.